Remembrance ..a stream of consciouness 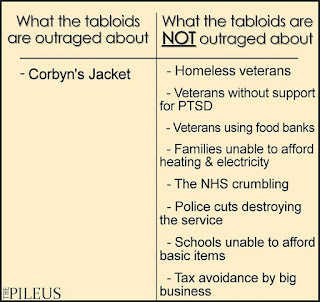 Another Monday as arms dealers in designer suits pretend to be peacemakers and remembrance observers. The Foreign Secretary flies off to Saudi for a grubby deal to mask institutional and state murder. As the Chequers deal nears collapse and the days shorten. It's another day for the 13,000 veterans who are homeless. The Chief Executive of the Royal British Legion sets off for his £10,000 a month salary. Meanwhile the Right Wing press fetishists moan about rain coats and the Gammons flex in near sexual ecstasy about Royals in Fancy Dress. These are the days of madness...too much truth for so many is so hard to bare. Denial and projection becomes the main order of Right Wing politics. Shelley's poem England 1819 was never more apt. It's been 200 years since then and I wonder what new Pererloo awaits around the corner...these are strange days..the future is not clear. As Blair and May walk back from the Centotaph in designer suits drenched in invisible blood from Iraq and Yemen the words of John Lennon's "How do you sleep," can be heard The Gammons are silent and afraid. Corbyn nears power and the age changes..

Why should the limbless and wheelchair victims of war be after the rest...they should be first..they are the ones bearing witness to war.. the blind next and as the strains of God Save the Queen and it's dirge like nature sounds out over the cenotaph. Why should we sing this dirge? Who should she be victorious over? These are the limbless and they are blind to what they do..I have watched the establishment troop by...it's sick . With a few exceptions I have seen the senior politicians troop by. Those who took arms dealers in their train as they travelled the world. Cameron, Blair and May what are they here for. These are the empowerers of the military industrial complex What runs through their minds as they stand there. 100 years have gone by and still the arms dealers trade, still the working classes of each country slaughter one another, and still the troops are used to prop up centrist and right wing politicians. For 100 years young people of my son's age have been recruited from areas of high unemployment. Still the homeless and trsumztised veterans are thrown on the scrap heap. Why must it go on? Why have we not learnt? And 200 years after Shelley's The Masque of Anarchy there are hard faced politicians like Eldon and Castlereagh and they are still Tories and who knows if another Pererloo lays just around the corner....it's time to dissolve the Royal British Legion and begin again...it's time to dissolve the monarchy with it and the whole formal nature of the state that is on parade . This is old Halloween and soldiers have been slain for 10, 000 years. It's time now to remember in a new way and to turn the weapons to plough shares...I have set with so many suffering from PTSD..I am fed up with it..WTF is Help for Heroes doing here..they keep 90% of the funds raised for the charity..I am so angry about this...WTF
Posted by Any Human Heart at 13:04