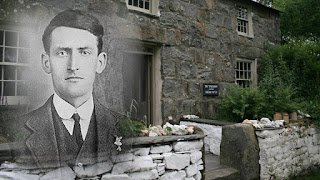 When the Julian Calender was abolished in 1752  twelve dats were taken from the Cacalender. It meant that at the Armistice of 1918 occured ib what was known as "Old Halloween" The irony is not lost on me. It was the old celtic Festival that we remembered the dead one. In Wales we had lost this great poet. I would like to tell you about him. 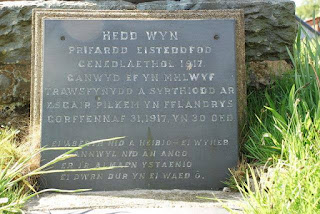 Gwae fi fy myw mewn oes mor ddreng,
A Duw ar drai ar orwel pell;
O'i ôl mae dyn, yn deyrn a gwreng,
Yn codi ei awdurdod hell.
Pan deimlodd fyned ymaith Dduw
Cyfododd gledd i ladd ei frawd;
Mae sŵn yr ymladd ar ein clyw,
A'i gysgod ar fythynnod tlawd.
Mae'r hen delynau genid gynt,
Ynghrog ar gangau'r helyg draw,
A gwaedd y bechgyn lond y gwynt,
A'u gwaed yn gymysg efo'r glaw
Why must I live in this grim age,
When, to a far horizon, God
Has ebbed away, and man, with rage,
Now wields the sceptre and the rod?
Man raised his sword, once God had gone,
To slay his brother, and the roar
Of battlefields now casts upon
Our homes the shadow of the war.
The harps to which we sang are hung,
On willow boughs, and their refrain
Drowned by the anguish of the young
Whose blood is mingled with the rain

Change From Julian to Gregorian Calendar

The Gregorian calendar was first introduced in 1582, but it took more than 300 years for all the different countries to change from the Julian Calendar.

The Gregorian Calendar, also known as the Western or Christian Calendar, is the most widely used calendar in the world today. Its predecessor, the Julian Calendar, was replaced because it did not properly reflect the actual time it takes the Earth to circle once around the Sun, known as a tropical year.


Too Many Leap Years

The reason the Julian Calendar had to be replaced was the formula it used to calculate leap years. The Julian formula produced a leap year every four years, which is too many. The Gregorian Calendar uses a much more accurate rule for calculating leap years.

To get the calendar back in sync with astronomical events like the vernal equinox or the winter solstice, a number of days were dropped.
The papal bull issued by Pope Gregory XIII in 1582, decreed that 10 days be dropped when switching to the Gregorian Calendar. However, the later the switch occurred, the more days had to be omitted. (See table below).
This created short months with only 18 days and odd dates like February 30 during the year of the changeover.
In North America, the month of September 1752 was exceptionally short, skipping 11 days.

The Gregorian Calendar was first introduced in 1582 in some European countries (*). However, many countries used the Julian Calendar much longer. Turkey was the last country to officially switch to the new system on January 1, 1927.
The delay in switching meant that different countries not only followed different calendars for a number of years but also had different rules to calculate whether a year was a leap year.
This explains why the years 1700, 1800, and 1900 were leap years in countries still using the Julian calendar (e.g. Greece), while in countries that had adopted the Gregorian calendar (e.g. Germany), these years were common years.

Sweden and Finland had a "double" leap year in 1712. Two days were added to February, creating February 30, 1712. This was done because the Leap Year in 1700 was dropped and Sweden's calendar was not synchronized with any other calendar. By adding an extra day in 1712, they were back on the Julian calendar. Both countries introduced the Gregorian calendar in 1753.


Is There a Perfect Calendar?

This Revised Julian calendar uses even more complex rules to determine when to add a leap day. With an error of only about two seconds per year (or one day in 31,250 years), it is roughly 10 times more accurate than today's Gregorian calendar and one of the most accurate calendar systems ever devised. However, it is not used by any country, only by certain orthodox churches.
Posted by Any Human Heart at 13:17