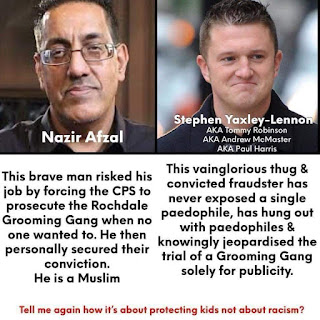 UKIP have now entered the realm of the far right. The Tommy Robinson appointment completes the process. A few months ago UKIP members disrupted a progressive bookshop. The week before last Robinson supporters attacked a local school in Swansea via social media. Tommy Robinson's first conviction was for assaulting a police man who intervened in a violent attack by Robinson on a former girlfriend. Even Farage condemns UKIP turn as turning to the street gang. What a hypocrite Farage is now ....he began the process with his 'breaking point: poster. I have been pointing out UKIPs trajectory for a lo g time and everything I predicted is now true.. 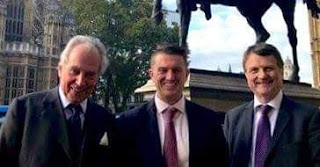 Robinson has only shown an interest in paedophiles who have brown skin He has never appeared at a white grooming trial . He has never pointed out culturally that paedophilia may take certain forms in certain areas. This is a problem of certain cultural forms and of masculinity. It may well be that in northern towns the grooming gangs may have a particumar local form of masculinity. Yet in other places white culture will produce another form of paedophilia. All associative groups of paedophiles behave culturally in certain ways and with certain attitudes . The problem is that of power, masculinity and chauvinism. All paedophilia must be challenged wherever it comes from but it must not play into the hands of the far right. However Tommy Robinson and Gerald Barton are not interested in the reality of male power and masculinity and of the nuances necessary to understand the situation. It would be too uncomforatble for them as they too represent flawed forms of masculinity. They are interested in the street gangs and the methods of Weimar. As it is I am yet to hear of Robinson or Batten commenting on the EDL member convicted of child abuse or of white grooming gangs and associations of white paedophiles.

On December 9th a pro Brexit rally a d march will be adressed by Robinson and Batten. The pro Brexit case is now merging with the racism of the EDL and UKIP and the ERG are linking with it. The taint of the far right now perverts an honourable left wing case for Brexit. It is the fly of fascism corrupting the ointment of European criticism. Nearly two years ago I pointed out what was happening. Those of the Lexit Left were warned about what would happen. They choose to ignore the warnings that they were contributing to this process by being unwittingly and unconsciously partial Sorcerors Apprentices.

The Brexit case is now connected clearly with that of the Far Right and for a completion of the Thatcherite revolution. There is now an overwhelming case for a General Election and if not that a popular vote on the May deal. Those of the left supporting the Brexit must now wake up to the reality and smell the bitter Coffee of Weimar that is laced with Krystallnacht....Tommy and Gerald are making it so.. as the street gangs return. The executive of UKIP refused to allow a ballot of members on the matter of Tommy Robinson joining the party. I have a hunch they would have voted to accept him..perhaps that's why the executive refused to allow it...are you staying in the party Gareth Hanford?
Posted by Any Human Heart at 13:23