No Platform for Racists and Fascists..... why I support it 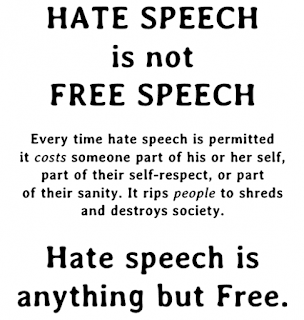 Freedom in a free society is supposed to be for all. Therefore, freedom rules out imposing on the freedom of others. You are free to walk down the street, but not to keep others from doing so.
The imposition on the freedom of others can come in overt, immediate physical form — thugs coming to attack with weapons. Violence may be a kind of expression, but it certainly is not “free speech.”

Like violence, hate speech can also be a physical imposition on the freedom of others. That is because language has a psychological effect imposed physically — on the neural system, with long-term crippling effects.

Here is the reason:

All thought is carried out by neural circuitry — it does not float in air. Language neurally activates thought. Language can thus change brains, both for the better and the worse. Hate speech changes the brains of those hated for the worse, creating toxic stress, fear and distrust — all physical, all in one’s neural circuitry active every day. This internal harm can be even more severe than an attack with a fist. It imposes on the freedom to think and therefore act free of fear, threats, and distrust. It imposes on one’s ability to think and act like a fully free citizen for a long time.
That’s why hate speech imposes on the freedom of those targeted by the hate. Since being free in a free society requires not imposing on the freedom of others, hate speech does not fall under the category of free speech.

Hate speech can also change the brains of those with mild prejudice, moving it towards hate and threatening action. When hate is physically in your brain, then you think hate and feel hate, you are moved to act to carry out what you physically, in your neural system, think and feel.
That is why hate speech in not “mere” speech. And since it imposes on the freedom of others, it is not an instance of freedom. 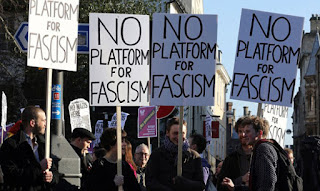 "No-platforming is not about taking full control of what speech gets to exist, as if without these speakers speechifying we’d reach some post-fascist utopia. No-platforming is only useful if it is contextualized in a broader abolitionist struggle, which recognizes that white supremacy will not do away with itself by virtue of being “wrong.” Surely by now liberals have realized the folly in assuming justice is delivered by “speaking truth to power”? Power knows the truth, and determines what gets to be the regime of truth. The “truth” of racial justice will not be discovered, proved or argued into lived actuality, but fought for and established."

The principle of ‘no platform’ is that speakers or organisations that publicly espouse violent, racist or fundamentally anti-democratic ideas, as well as others forms of hate speech should be prevented from doing so. Although not limited to university campuses, student organisations across the global West have attempted to implement a policy of no platform to deny explicit racists and fascists from publicly speaking, organising or recruiting on campuses. As a defined policy, no platform began within the National Union of Students (NUS) in the UK in the mid-1970s in reaction to appearances by the fascist and populist far right (particularly the National Front and the Monday Club) on British university campuses. The policy meant that invitations for far right and racist speakers would be withdrawn and prevented, venues would be off-limits to these speakers and that these organisations would not be allowed to have a physical presence on campus. This would often be enforced bureaucratically, but elements of the student movement also argued that physical confrontation might be necessary to prevent these speakers from speaking or assembling on university grounds.
Since the mid-to-late 1960s, the growing student movement in Britain, as well as across the world, had attempted to prevent certain people from speaking at universities, often representatives of the government or supporters of the Vietnam War or apartheid South Africa (as well as other controversial speakers like psychologist Hans Eysenck), but this was on a much more ad hoc basis. The policy of no platform was formulated in a period of crisis, when the forces of the far right were starting to mobilise more confidently.

Physically confronting fascists did not simply emerge as a tactic in the early 1970s, but was influenced by the anti-fascist traditions of the inter-war period. Militant anti-fascism existed across the global West in the 1920s and 1930s and although it was not as violent as in Italy or Germany, anti-fascism in Britain (and the United States) was indeed physical and confrontational. The anti-fascist movement of the 1970s, instrumental in developing the no platform policy, built upon the tactics fostered in the 1930s (and again in the late 1940s), primarily encouraging venues not to allow fascists to speak or organise in them and physically occupying public spaces where fascists attempted to congregate.

The policy of no platform, first explicitly pronounced in Britain, spread across the global West and was embraced by anti-racists in the student movements in the United States, Canada, Australia, West Germany and France, amongst others. For instance, from the mid-1970s onwards, the phrase was being used in the US by Trotskyist activists (such as those in the Spartacist League) against the National Socialist White Peoples’ Party and the Ku Klux Klan from organising on university campuses or appearing on television. In the mid-1980s, university campuses across Canada saw student activists disrupting speaking engagements of the South African Ambassador Glenn Babb. In Australia, student groups mobilised to drive far right groups, such as the Australian National Alliance and the Progressive Nationalist Party, off university campuses around the country.

As it was originally devised, the principle of no platform meant preventing violent and organised racist groups and speakers from appearing on university campuses. It was not intended to apply to the Conservative Party and other socially conservative groups. The reasoning was that these fascist organisations were anti-democratic and sought to remove the democratic rights of others, so they could not rely upon the democratic principle of free speech if it was to be denied to people they demonised.

However because the principle relied upon combining grassroots political activism with bureaucratic measures, it was extended by certain student groups to others, infamously to student groups supporting Israel and to sexists, as well as to some right-wing Tory MPs (such as Keith Joseph and John Carlisle). In more recent years, some activists have attempted to no platform radical feminists who they believe are transphobic.
The widening of the scope for no platform has led to controversy within student and activist circles since the 1970s, but while many agree on applying the principle to explicitly racist and fascist organisations and speakers, it has been individual student unions or student groups that have sought to extend it. No platform is a tactic that needs to be negotiated with regard to its immediate context and requires democratic debate over it use in any given campaign. At the moment, the NUS only applies the policy of no platform at the national level to several openly racist or jihadist groups, such as the British National Party, National Action and Hizb-ut-Tahir. Individual student unions can apply the principle to other groups depending on the local situation. No platform is about preventing what is colloquially known as ‘hate speech’ rather than speech that is merely offensive. In many Western countries, unlike the United States, this opposition to hate speech is in line with broader human rights legislation that protects people from hateful or harmful speech (although these laws are often portrayed as against ‘free speech’).

The question as to whether universities should or should not host speakers who propound offensive ideas does not fully grasp the situation. Students and activists are not simply mobilising to prevent those propounding offensive ideas, but harmful speech that is often linked to harmful actions. As institutions, universities promote the notion that they are neutral venues where competing ideas are debated and for the most part, attempt to excuse themselves from taking any action that prevents people or organisations from publicising their ideas on campus (although critics point out that anti-extremism programs, such as Prevent in the UK, have been implemented to a degree that curtails freedom of speech). With the case of the UK, universities are not allowed to hinder free speech under the Education Act no. 2 1986. However this does not apply to student unions or individual student bodies that exist as separate legal entities to the university. It is predominantly a democratic decision by the student bodies at the grassroots level to allow or not allow speakers that may engage in harmful or hateful speech, rather than the university administration.

Free speech absolutism often proposes that, above all else, university are a marketplace of ideas where students should be intellectually challenged and while students are presented with a range of ideas on campus, students also have the right not to be subjected to hateful or harmful speech and can forcefully reject proponents of these ideas. These forms of hate speech call for taking away the rights of certain sections of society and are thoroughly anti-democratic, and cannot be tolerated as within the realm of democratic ‘debate’.

When figures of the fascist or populist far right are invited to speak on university campuses (and in other public venues), these speakers do not present their ideas into a vacuum and often a broader coterie of far right forces are mobilised to attend these events, which can lead to intimidation, harassment and violence. Many students are unwilling to allow this to happen and organise to prevent these forces from coalescing on campus. In the past few years, various ‘alt right’ figures and groups have attempted to hold public events, campaign or recruit on university campuses in the United States, Britain, Australia and Canada. As the far right forces gain notoriety in an era of populism, many people, including students and other younger activists, are worried about what these forces might lead to. The battle for the university campus is part of a wider resistance to what they see as the zombie march of a regressive and reactionary right that should have been left behind by now. 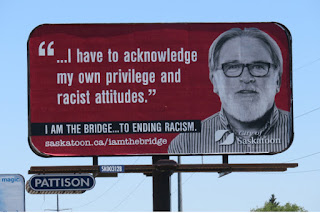