A right wing subtext and Prince Neil comes to Gower 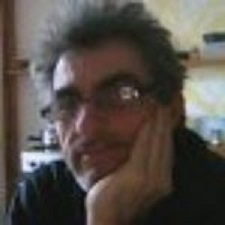 Simon Gruffydd Foster is one of the founders of EIn Gwlad is extremely closely  connected with Jac o the North and his ' right wing milleau.'. Here is Mr Foster's biography
https://the-eye.wales/independence-day-break/ and more here https://freewales.org/about/


And this is the  basic  right wing agenda  he puts out on his twitter https://twitter.com/freewales

What is very interesting is that  Mr Foster also  promotes the Social Credit philosophy, that  was so beloved of G K Chesterton and European Fascists  and the far Right of  the 1930s  here is his website for your information his website  https://wsc.wales/


It has the odour of Trump blended with the essence of viktor Orban.
`

Virtually our entire money supply (97% in the UK) is created out of thin air by banks as Private Debt, enslaving both citizens and governments under crushing and impoverishing debt.
Our money system is designed and controlled by private interests that enrich the few while impoverishing the many.
This system imposes false scarcity and austerity – when there is no physical reason why that should be so.
If left unchecked, this grossly unjust system of money creation will result in:


We desperately need a money system fit for the 21st century – a stable and just money system for everyone, not just the privileged few.
Money must be based on social credit, not private debt.
Social Credit based economy will –

The worldwide Social (Social) Credit movement got started during the Great Depression before it was overshadowed and buried by WWII.
This long overdue relaunch of the Social Credit movement is based on the needs of Wales in the 21st century from a Welsh perspective.
Welsh Social Credit  is based on 3 core Principles
Economic Democracy
The basis of our economic system is money. The systems that creates and distributes money must be transparent, accountable, democratic and just. The current system of private money creation as debt is deceptive, destructive, unjust and undemocratic. There can be no justice while banks create and control our money supply enslaving people and governments in interest-bearing debt. The system that creates money as debt lies at the heart of our economic, social and environmental ills. It must be replaced.

Free Speech
Freedom to think what we like and say what we think is the basis upon which all other social freedoms rest. There can be no limits to freedom of speech, or it is not free. Free Speech is the cornerstone of genuine democracy and our birthright. This freedom must be defended without compromise.`


to tour Wales  and they have a  meeting in Swansea on November 17th as part of their road show. The Swansea meeting will be at the Mayor's Mansion House, so  we can clearly see they have sufficient funds .  My  little birds and  Dire Wolves have asked the following  question…did a certain Ioan Richard  asa former Lord Mayaor of Swansea get the Mansion House for them ?.. I mean I could not comment on that matter you will have to decide for yourself . Heres the link  for you to reflect on  https://nation.cymru/news/book-about-the-welsh-independence-campaign-published-by-ein-gwlad-member/


. It raised the matter of how long people should be resident in Wales before they should be allowed to vote?Nearly 40 percent of respondents said it should be between 10 and 18 years  this is most indicative of a conservative social outlook and reveals much about the  thinking of many Ein Gwlad supporters on issues of immigration . We can see that some of them are even the right of  UKIP The poll is classic Alt Right  method and approach and  comes straight out of the Viktor Orban  political stable  It has a stench of other right wing populists like  Matteo Salvini in italy, and  the Swedish Democrats and  of Bolsorano in Brazil. 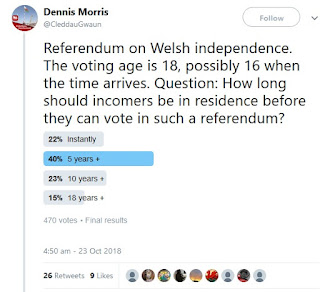 I was flabergasted  to hear that Officers of  the Gower Plaid Cymru constituency - are holding a special meeting on Tuesday November 6th where the guest speaker will be a certain Neil Mcevoy. And  that Princr Neil will apparently  be explaining how to run 'successful campaigns'.

Neil Mcevoy  was expelled by Plaid Cymru as the Plaid group in the Senedd could not work with him and  had ignored repeated warnings from the executive about his conduct. So it is nothing short of  astonishing that the officers of Gower Party have invited him to speak. its certainly a massive snub to local AMs Dai Lloyd and Bethan Sayed and to the Party leadership of Adam Price..


They've even listed it on the Gower branch`s facebook page ……https://www.facebook.com/plaidgwyr/


The public - and Plaids opponents - could be forgiven for thinking  that Neil Mcevoy has been allowed to rejoin Plaid.  It is of course unlikely he ever will, and now that he has  founded Propel ( often know as Repel by its critics) and that now the Max Greagsby team his  appeared within its ranks

It is now clear supporters of his have gained  a significant role within Yes Cymru, and  I suspect that if Ein Gwlad were strong enough  then would  join them  ( as he may do anyway).


And as I understand now every committee member of Yes Cymru  now  belongs to Propel or Ein Gwlad. The plot thickens…..
Posted by Any Human Heart at 16:32