An introduction to Don Juan by Lord Byron

An introduction to Don Juan


What does Don Juan tell us about Byron’s view of society and his fellow authors? Dr Stephanie Forward explains what we can learn from the poem’s form, narrator and reception.
‘…it may be bawdy – but is it not good English? it may be profligate – but is it not life, and is it not the thing? Could any man have written it – who has not lived in the world?’ (Byron to his friend, Douglas Kinnaird, 1819).

Don Juan is a famous legendary character who has featured in many literary and musical works. These include Molière’s play Dom Juan, ou Le Festin de pierre (1665), Mozart’s opera Don Giovanni (1787), Byron’s unfinished poem Don Juan (1819-1824) and George Bernard Shaw’s Man and Superman (1903). Traditionally Don Juan is depicted as an arrogant and aggressive libertine who is, ultimately, damned. In Byron’s version the portrayal is very different: his Don Juan (pronounced Joo-ann) is a naïve, passive young man. He is seduced, rather than being a seducer.
Don Juan is divided up into 16 parts, termed ‘cantos’. The storyline begins with Juan’s upbringing and his education. At 16 he has an affair with a married woman, Donna Julia. His mother, Donna Inez, sends him away from his native Seville, but there is a shipwreck. Some of the survivors resort to eating Juan’s spaniel and his tutor! When Juan is washed ashore on an island, he has an affair with Haidée (the daughter of a pirate). The lovers are parted, and subsequently Haidée dies of a broken heart. Juan is sold into slavery in Constantinople, where the Sultan’s wife hides him in the harem, disguised as a woman. Juan manages to escape, then serves as a mercenary on the side of the Russians in the Russo-Turkish conflict. Byron conveys the horrors of war: ‘…the glow / Of burning streets, like moonlight on the water, / Was imaged back in blood, the sea of slaughter’ (Canto VIII, stanza 122). Juan is sent to St Petersburg with dispatches: here he becomes a favourite of Catherine the Great. When Juan falls sick, physicians recommend a change of climate; so Catherine sends him to England as an ambassador. Having dealt with a mugger, Juan settles to life in London. He is sought after by intellectuals, and also experiences the mad social whirl of a London ‘season’. Juan is invited to a country estate where he feels drawn to the hostess, Lady Adeline. The 16th Canto ends on a cliff-hanger: a Duchess disguised in a friar’s cowl enters Juan’s bedroom. Unfortunately Byron only managed to produce 14 stanzas of Canto XVII. His early death prevented the completion of Don Juan.
Byron reckoned that the English characters were based on people he had known, and he derived great satisfaction from exposing their hypocrisy. 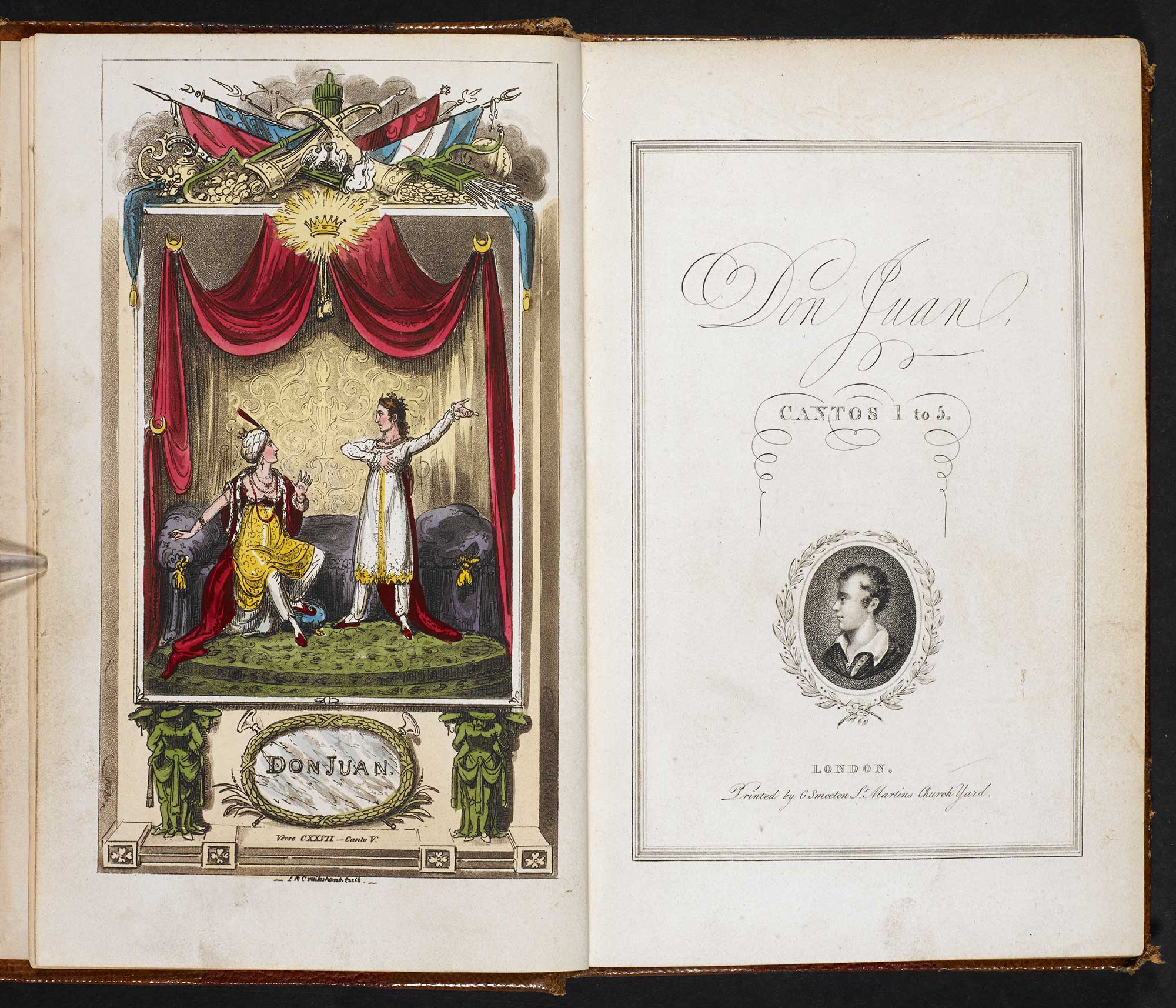 Byron’s Don Juan (1819-24) was seen as scurrilous, though Byron himself proposed that it attacked vice in society by highlighting it.
View images from this item  (4)
Usage terms Public Domain

Don Juan is not really the hero of Byron’s poem: rather, the key character is the poem’s narrator. He has a very distinctive voice, presenting himself as cynical and world-weary. Frequently he digresses from the storyline. This is a chatty, urbane aristocrat, whose satirical views sound remarkably like Byron’s own! The disillusioned tone reflects Byron’s personal sense of disappointment and his frustration. In politics he was a Whig, but his party did not hold power. Don Juan gave him scope to tackle a range of his own concerns; to criticise and ridicule society and attack literary, political and religious figures. Byron once said: ‘There are but two sentiments to which I am constant – a strong love of liberty, and a detestation of cant’ (Countess Blessington, Conversations of Lord Byron, 1834).

The poem’s narrator stresses his age. Nevertheless, throughout Don Juan there is a deliberate representation of the narrator/poet as hero. Byron plays with his readers by exploiting the identification of the poem with its creator. In Canto XI stanza 55 he writes:

Even I - albeit it I'm sure I did not know it,
Nor sought of foolscap subjects to be king, -
Was reckon'd, a considerable time,
The grand Napoleon of the realms of rhyme.

The poem is classed as a mock-epic. Epics are usually long narrative poems about important people and significant events. Mock-epics make fun of this form of writing: they emulate the style, but the subject matter is trivial and the heroic figure is not a worthy one. Although the work as a whole has serious aspects as well as humorous ones, Byron decided to use comic verse for Don Juan. He chose ottava rima – an Italian form in which each stanza has eight lines, with the rhyme pattern abababcc: in other words, there are three sets of alternate rhymes, followed by a final rhyming couplet. The first six lines build up towards a joke, with the final couplet providing the punchline. For example, in stanza 22 of Canto I the narrator pokes fun at intellectual women (known as ‘bluestockings’). The stanza ends: ‘Oh ye lords of ladies intellectual, / Inform us truly, have they not hen-peck’d you all?’

Don Juan has a lengthy Dedication. This was actually suppressed in Byron’s own lifetime, and was not published until the 1830s.
It begins with an attack on the Poet Laureate, Robert Southey, and the other famous Lake District residents, Wordsworth and Coleridge. The second generation of Romantic poets felt that the older generation had become part of the Establishment – that they had ‘sold out’. Byron acknowledges that they have poetic talents and should be ‘duly seated on the immortal hill’ (stanza 6); however their egotism makes him ‘wish you’d change your lakes for ocean’ (stanza 5). He proceeds to praise Milton, a poet who stayed true to his principles. There was another reason for Byron’s intense dislike of Southey: he believed him to have spread a rumour about Byron and Percy Bysshe Shelley forming ‘a League of Incest’, each having intercourse with both Mary Shelley and her stepsister. In Canto I, stanza 205, Byron must have revelled in taking his revenge:


Thou shalt believe in Milton, Dryden, Pope;
Thou shalt not set up Wordsworth, Coleridge, Southey;
Because the first is crazed beyond all hope,
The second drunk, the third so quaint and mouthey.

The English Foreign Secretary, Viscount Castlereagh, is also denounced in the Dedication, as an ‘intellectual eunuch’, a ‘bungler’ and a ‘tinkering slavemaker’ (stanzas 11 and 14). 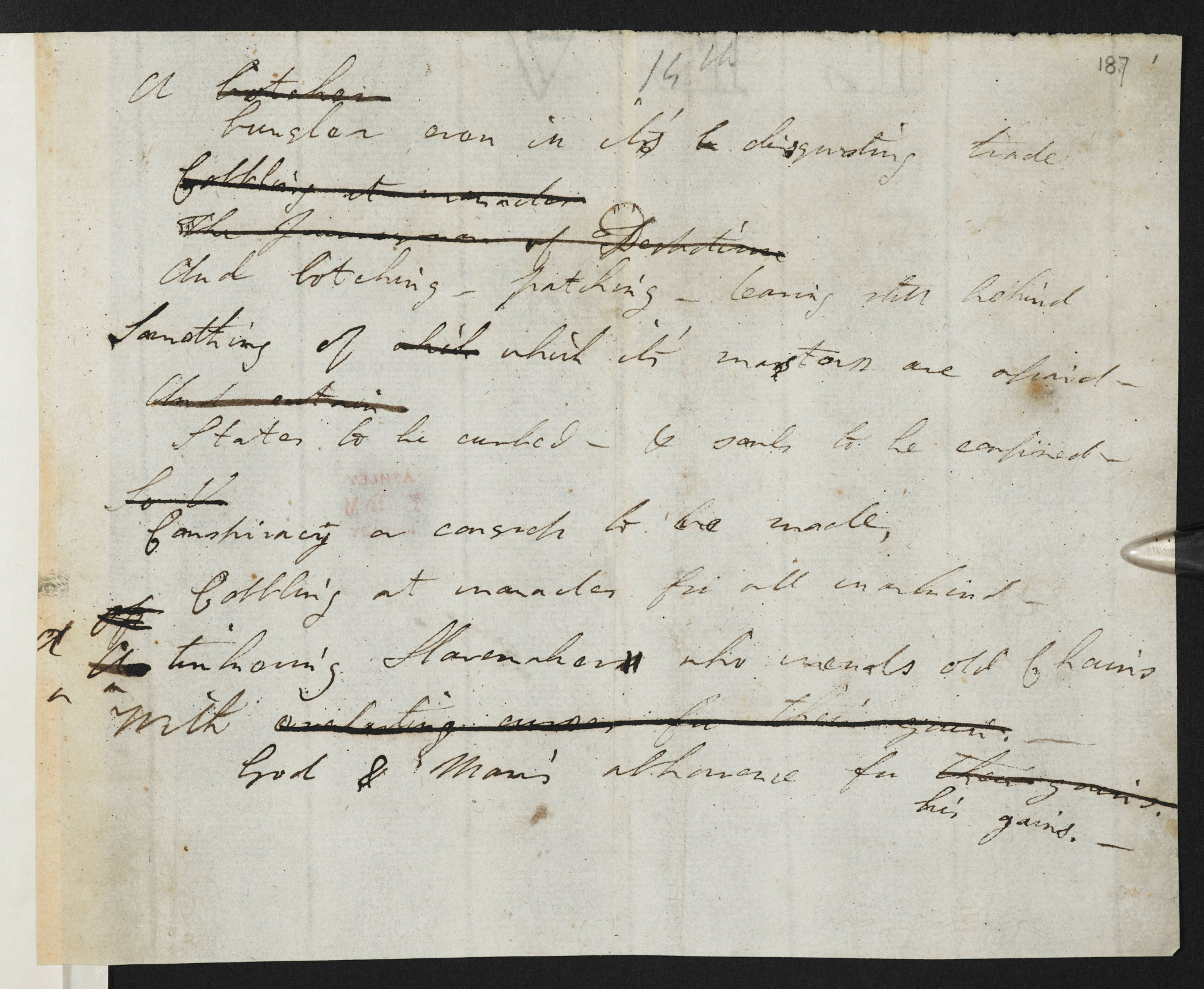 Byron’s dedication to Don Juan, not included in the first edition, attacked poets such as Wordsworth and Southey, and political figures such as Lord Castlereagh, who was responsible for repressive measures in the UK.
View images from this item  (6)
Usage terms Public Domain 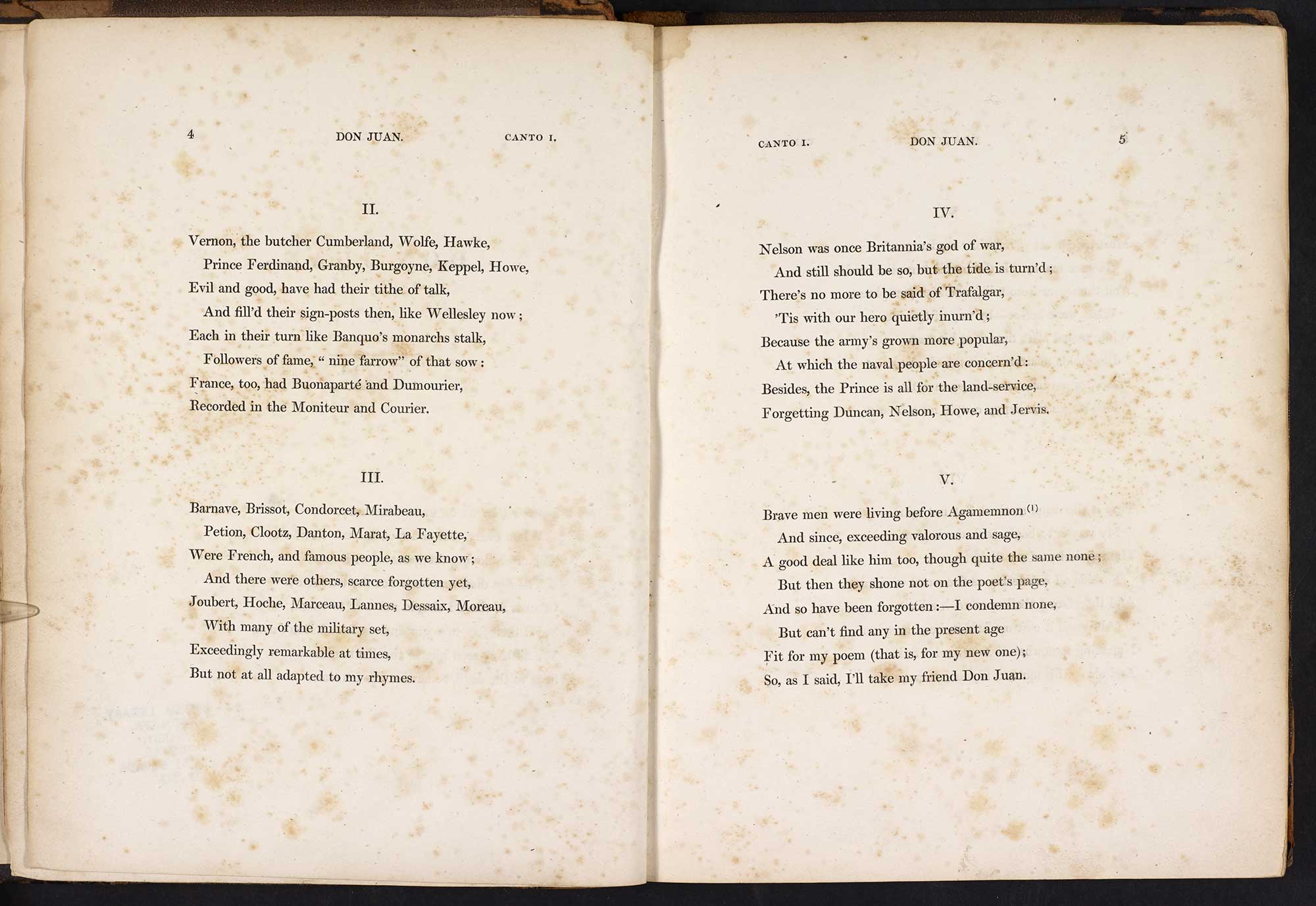 Murray’s first publication of Don Juan (1819) did not show the publisher’s name, nor did it include the dedication in which Byron attacked political and literary figures.
View images from this item  (6)
Usage terms Public Domain

When Byron was working on the first part of his poem, he was conscious that it may be ‘too free for these very modest days’. Some of his friends voiced qualms about the content: for example, they feared that Donna Inez was blatantly identifiable as a portrayal of Lady Byron (even though the poet denied it). The publisher, John Murray, also advocated changes. In letters to John Cam Hobhouse and Douglas Kinnaird, Byron refused to allow ‘Donny Jonny’ to be interfered with, arguing that his poem should be ‘an entire horse or none’ (30 July and 19 January, 1819). He declared: ‘I will not give way to all the Cant of Christendom’.

Don Juan was published serially, like a novel. This enabled the poet to take note of his readers’ reactions as he proceeded. The first volume contained Cantos I and II and appeared in 1819. The names of the poet and the publisher were omitted.  The irreverence and the risqué language and content deterred some potential purchasers. This was not appropriate reading material for ladies! One reviewer denounced it as ‘filthy and impious’. Wordsworth viewed Byron as dangerous: ‘I am convinced that Don Juan will do more harm to the English character, than anything of our time…’ (January 1820).
However Cantos III-V, published in 1821, elicited this outpouring from Byron’s friend Percy Bysshe Shelley: ‘It sets him not above but far above all the poets of the day: every word has the stamp of immortality…it fulfills in a certain degree what I have long preached of producing something wholly new & relative to the age – and yet surpassingly beautiful’ (10 August 1821, to Mary Shelley).
A different publisher brought out the subsequent volumes. John Hunt, a liberal, was prepared to take greater risks than Murray. For example, an outburst against Wellington had been suppressed from Canto III, but Hunt permitted its inclusion in Canto IX. Cantos VI-XIV came out in 1823, with XV and XVI following in 1824.
As Fiona MacCarthy has pointed out in her book Byron: Life and Legend (Faber and Faber, 2003), ‘Shelley was to remain Don Juan’s staunchest admirer.’ He enthused: ‘Nothing has ever been written like it in English – nor if I may venture to prophesy, will there be.’ 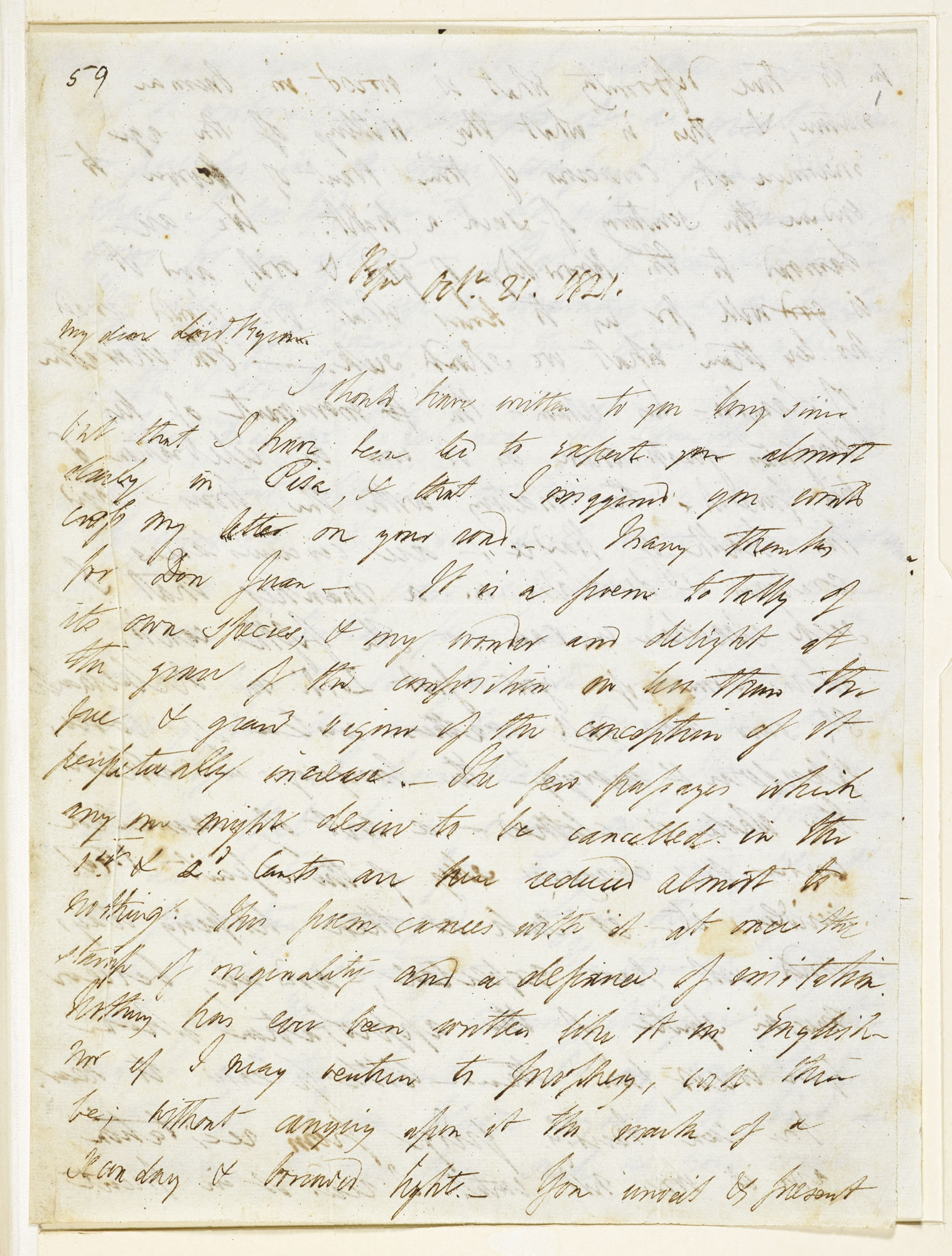 In this letter dated 21 October 1821, Shelley shows his support for Don Juan, maintaining that Byron had to portray vice in order to attack it.
View images from this item  (4)