Women Prophets in the Old Testament 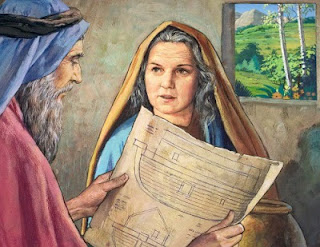 Those who seek an intimate relationship with God often turn to the prophets of the OT for inspiration. Commentaries such as Abraham Heschel’s classic, The Prophets, provide rich insight into these ancient visionaries. Anyone who has read Heschel’s masterpiece may feel a sense of holy envy as they discover “what the prophets mean to us and what they mean to God.”1 Yet for women, that sense of envy may be heightened by the assumption that the prophets of the OT form a category that largely excludes women. This article investigates the female prophets of the OT, offering a close examination of their texts and contexts. First, the words “prophet” and “prophecy” will be defined. Then, each of the female prophets named in the OT will be discussed, with attention paid to the ways biblical writers, redactors, and commentators may have minimized their impact. Other women in the text who performed prophetic activities will be identified, and the article will conclude with a reflection on female prophecy in ancient Israel.


What is a Prophet and What is Prophecy?

The Hebrew word for “prophet” is nabi, from the verb naba, “to call.” A nabi is called by God. The feminine form is nebiah, “female prophet” or “prophetess.” “Prophets” (pl.) is nebiim. Hebrew is a gendered language; thus, in a mixed group where as few as one male prophet is present, grammar demands that the plural noun be masculine. It is therefore difficult to identify all of the female prophets in the Scriptures.2
The formulaic phrase, “Thus says YHWH,” identifies the prophets as men and women who had access to God and spoke on God’s behalf. This phrase originated in the royal court, but not all prophecy involves oracles delivered to kings. Prophecy had many manifestations and modern scholars persist in probing its meaning.3 Joseph Blenkinsopp rightly notes that the prophetic books themselves represent “only a small and . . . anomalous minority” of all the prophets in ancient Israel.4 A broad range of professional religious intermediaries were engaged in a wide variety of prophetic activities: intercessory prayer (Jer 42:4); dancing, drumming, singing (1 Chr 25:1–3); interpreting laws (2 Kgs 22:15–17); inquiring of YHWH (Jer 37:7); delivering YHWH’s oracles (Isa 10:24); anointing kings (1 Kgs 1:34); resolving disputes (2 Chr 28:9–15); working wonders (1 Kgs 17); mustering troops (Judg 4); leading battles (Judg 5); archiving oracles in writing (2 Chr 13:22); and experiencing visions (Isa 1). Thus the writers of Scripture use the word “prophet” in a fluid way.5
Given the flexibility of the term, who might be called a “prophet”? According to Lester Grabbe, anyone summoned by God—male or female—can prophesy. Female prophets in the OT are simply prophets who happened to be female. In ancient Israel and throughout the ancient Near East, female prophets possessed the same spectrum of gifts as their male counterparts.6 Women could be prophets because, unlike priests and kings who inherited their positions, prophets were appointed by God.7 The OT does not indicate that the appearance of women prophets was unusual; however, in some instances female prophets may not have been accepted in the same way male prophets were, and their roles may have differed from those of male prophets.8 How accurately does the Bible reflect the historical reality of female prophecy in ancient Israel?9 To answer this question, the text must be examined closely.


The Text and its Backstory

Does the OT accurately reflect the extent of female prophecy in ancient Israel? Probably not, but it reflects the reality of a stratified patriarchal society in which a male elite virtually monopolized religious and political power. The androcentric focus of the texts has fostered a tradition of interpretation that centers on male prophets and obscures the role of female prophets, and this tradition has survived in the West for centuries.61 Recently, scholars such as Susan Ackerman, who believes women prophets were “anomalies,” continue to question the impact of the prophetesses or dismiss them completely.62
The Story Behind the Text
Christian women and men who see the Bible as a “mirror” that holds meaning for them today are unlikely to see themselves reflected in the brief accounts of the female prophets in the OT. Pastors rarely, if ever, preach on the subject; Sunday schools tend not to teach it. But through critical study, Gafney and others have exposed the bias behind the biblical accounts of the prophetesses and heightened awareness of bias in modern interpretation. Hopefully, the importance of the female prophets in ancient Israel will eventually be understood and accepted in academic circles and on pastoral and personal levels.