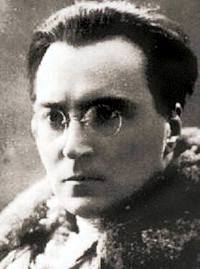 Victor Serge , born Victor Lvovich Kibalchich (Russian: Ви́ктор Льво́вич Киба́льчич; December 30, 1890 – November 17, 1947), was a Russian revolutionary and writer. Originally an anarchist, he joined the Bolsheviks five months after arriving in Petrograd in January 1919 and later worked for the Comintern as a journalist, editor and translator. He was critical of the Stalinist regime and remained a revolutionary Marxist until his death. He is best remembered for his Memoirs of a Revolutionary and series of seven 'witness-novels' chronicling the lives of revolutionaries of the first half of the 20th Century.

“A French essayist has said: 'What is terrible when you seek the truth, is that you find it.' You find it, and then you are no longer free to follow the biases of your personal circle, or to accept fashionable clichés. I immediately discerned within the Russian Revolution the seeds of such serious evils as intolerance and the drive towards the persecution of dissent. These evils originated in an absolute sense of possession of the truth, grafted upon doctrinal rigidity. What followed was contempt for the man who was different, of his arguments and way of life. Undoubtedly, one of the greatest problems which each of us has to solve in the realm of practice is that of accepting the necessity to maintain, in the midst of intransigence which comes from steadfast beliefs, a critical spirit towards these same beliefs and a respect for the belief that differs. In the struggle, it is the problem of combining the greatest practical efficiency with respect for the man in the enemy - in a word, of war without hate.”
“Early on, I learnt from the Russian intelligentsia that the only meaning of life lies in conscious participation in the making of history. The more I think of that, the more deeply true it seems to be. It follows that one must range oneself actively against everything that diminishes man, and involve oneself in all struggles which tend to liberate and enlarge him. This categorical imperative is by no way lessened by the fact that such an involvement is inevitably soiled by error: it is a worse error merely to live for oneself, caught within traditions which are soiled by inhumanity.”

What will become of us in twenty years’ time?” we asked ourselves one evening. Thirty years have passed now. Raymond was guillotined: “Anarchist gangster” (so the newspapers). I came across Jean again in Brussels, a worker and a trade-union organizer, still a fighter for liberty after ten years in jail. Luce has died of tuberculosis, naturally. For my part, I have undergone a little over ten years of various forms of captivity, agitated in seven countries, and written twenty books. I own nothing. On several occasions a Press with a vast circulation has hurled filth at me because I spoke the truth. Behind us lies a victorious revolution gone astray, several abortive attempts at revolution, and massacres in so great a number as to inspire a certain dizziness. And to think that it is not over yet.”
Posted by Any Human Heart at 12:51