Peterloo.. a reflection The masque of anarchy 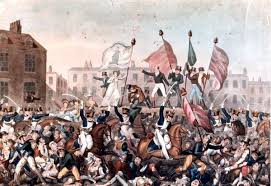 In 1819, the Manchester Yeomanry drew their sabres and charged a crowd of demonstrators. As Maxine Peake prepares to perform Shelley's angry poem about the outrage, John Mullan deciphers its verses for modern readers


On 16 August 1819, a crowd of more than 50,000 gathered at St Peter's Fields outside Manchester to support parliamentary reform. The radical orator Henry Hunt was to speak in favour of widening the franchise and reforming Britain's notoriously corrupt system of political representation. Magistrates ordered the Manchester Yeomanry to disperse the demonstration. The cavalry charged the crowd, sabres drawn, and at least 15 people, including a woman and a child, were killed.
The businessman John Taylor, who had witnessed the aftermath, went on to set up the Manchester Guardian in response. It was via newspapers, almost a month later, that Percy Bysshe Shelley, living in Italy, found out about what became known as the Peterloo massacre. "The torrent of my indignation," as he put it, flowed into The Masque of Anarchy, a poem devised to be accessible to a wide readership but doomed not to reach it. Though he sent it back to Britain, his friend Leigh Hunt felt it could not be safely published, the perpetrators of the massacre having been exonerated. It remained unpublished until the 1830s. This weekend, Maxine Peake will deliver a new interpretation of the work, mere steps from the site of the massacre itself.

Advertisement
Running to 91 stanzas, the poem is a prophetic dream, an apocalyptic vision of Regency Britain and the shaky legitimacy of its ruling class. In the first part, the nation's leading politicians parade like monsters, leading the figure of Anarchy around on a white horse to trample the multitudes. In this vision, the true anarchists are Britain's rulers, who delight in fear and disorder. Anarchy's followers, who include lawyers and priests, take possession of palace and parliament. They are challenged only by a "maniac maid" called Hope, though "she looked more like Despair".
Like the protesters at Peterloo, she is about to be trampled when a shape arises like a mist to kill Anarchy. We hear a voice advocating freedom and encouraging the people to seize it. We see "a great Assembly … Of the fearless and the free" assailed, like the Peterloo crowds, by the troops of their rulers. Yet their bayonets and scimitars are somehow defeated by the resolution of the people.

Sign up for Bookmarks: discover new books in our weekly email

Read more
The title of the poem refers both to a dramatic pageant (like the masques that monarchs stage to celebrate their power) and an organised deception (the "masquerade" of those in authority). The poet's political passions were notorious and are still famous, but it was not these that made him a great poet. He was always trying out different forms: each new poem was a new experiment with rhyme and metre. The vision is recounted in the same stanzas as were used in popular ballads. The result is a dizzying mixture of poetic wit and furious hyperbole.


The Masque of Anarchy
The first nine stanzas annotated

As I lay asleep in Italy
There came a voice from over the Sea,
And with great power it forth led me
To walk in the visions of Poesy.
The poem is a dream, like the dream visions in Chaucer or Bunyan's Pilgrim's Progress. Yet in the first verse we also have the sense of Shelley being woken from the unreality of his life in Italy.
I met Murder on the way -
He had a mask like Castlereagh -
Very smooth he looked, yet grim;
Seven blood-hounds followed him:
Viscount Castlereagh, leader of the Tories in the Commons, was a spokesman for the harsh measures of political repression that followed the Peterloo massacre. Note that "Murder" is like Castlereagh, not the other way round: individual politicians are reduced to personifications of eternal vices.
All were fat; and well they might
Be in admirable plight,
For one by one, and two by two,
He tossed the human hearts to chew
Which from his wide cloak he drew.
Shelley's friend Leigh Hunt praised his "union of ludicrousness with terror" – as in this blending of apocalyptic vision with pantomime.
Next came Fraud, and he had on,
Like Eldon, an ermined gown;
His big tears, for he wept well,
Turned to mill-stones as they fell.
Lord Eldon was lord chancellor. He decided the fate of Shelley's children by his first wife, Harriet, after her suicide – refusing Shelley custody because of his "immoral and vicious" principles. Eldon was renowned for weeping even as he pronounced the harshest of sentences.
And the little children, who
Round his feet played to and fro,
Thinking every tear a gem,
Had their brains knocked out by them.
A stanza echoed in WH Auden's Epitaph on a Tyrant: "when he cried the little children died in the streets".
Clothed with the Bible, as with light,
And the shadows of the night,
Like Sidmouth, next, Hypocrisy
On a crocodile rode by.
Viscount Sidmouth was home secretary and defended the Peterloo massacre. He evokes shadows because he was in charge of the government's secret service, and is "clothed with the Bible" because of his apparent piety: he was an advocate of church building.
And many more Destructions played
In this ghastly masquerade,
All disguised, even to the eyes,
Like Bishops, lawyers, peers, or spies.
A typical Shelley list, the "spies" recalling Sidmouth's network of informers.
Last came Anarchy: he rode
On a white horse, splashed with blood;
He was pale even to the lips,
Like Death in the Apocalypse.
Shelley explicitly evokes the Book of Revelation: the three British lords and Anarchy are the four horsemen of the Apocalypse.
And he wore a kingly crown;
And in his grasp a sceptre shone;
On his brow this mark I saw -
'I AM GOD, AND KING, AND LAW!'
Like the Mark of the Beast in Revelation on the one who is King of Kings, and Lord of Lords.

On the 16th of August 1819 the huge open area around what's now St Peter's Square, Manchester, played host to an outrage against over 60,000 peaceful pro-democracy and anti-poverty protesters; an event which became known as
The Peterloo Massacre.

An estimated 18 people, including four women and a child, died from sabre cuts and trampling. Nearly 700 men, women and children received extremely serious injuries. All in the name of liberty and freedom from poverty.
The Massacre occurred during a period of immense political tension and mass protests. Fewer than 2% of the population had the vote, and hunger
was rife with the disastrous corn laws making bread unaffordable.

On the morning of 16th August the crowd began to gather, conducting themselves, according to contemporary accounts, with dignity and discipline, the majority dressed in their Sunday best.

The key speaker was to be famed orator Henry Hunt, the platform consisted of a simple cart, located in the front of what's now the Manchester Central Conference Centre, and the space was filled with banners - REFORM, UNIVERSAL SUFFRAGE, EQUAL REPRESENTATION and, touchingly, LOVE.
Many of the banner poles were topped with the red cap of liberty - a powerful symbol at the time.

You can see where all this took place on these two maps of Manchester.

Local magistrates watching from a window near the field panicked at the sight of the assembly, and read the riot act, (in)effectively ordering what little
of the crowd could hear them to disperse.

As 600 Hussars, several hundred infantrymen; an artillery unit with two six-pounder guns, 400 men of the Cheshire cavalry and 400 special constables waited in reserve, the local Yeomanry were given the task of arresting the speakers. The Yeomanry, led by Captain Hugh Birley and Major Thomas
Trafford, were essentially a paramilitary force drawn from the ranks of the local mill and shop owners.
On horseback, armed with sabres and clubs, many were familiar with, and had old scores to settle with, the leading protesters. (In one instance,
spotting a reporter from the radical Manchester Observer, a Yeomanry officer called out "There's Saxton, damn him, run him through.")

Heading for the hustings, they charged when the crowd linked arms to try and stop the arrests, and proceeded to strike down banners and people with
their swords. Rumours from the period have persistently stated the Yeomanry were drunk.

The panic was interpreted as the crowd attacking the yeomanry, and the Hussars (Led by Lieutenant Colonel Guy L'Estrange) were ordered in.

As with the Tiananmen Square Massacre, there were unlikely heroes amoung the military. An unnamed cavalry officer attempted to strike up the swords
of the Yeomanry, crying - "For shame, gentlemen: what are you about? The people cannot get away!" But the majority joined in with the attack.

The term 'Peterloo', was intended to mock the soldiers who attacked unarmed civilians by echoing the term 'Waterloo' - the soldiers from that battle being seen by many as genuine heroes.

By 2pm the carnage was over, and the field left full of abandoned banners and dead bodies. Journalists present at the event were arrested, others
who went on to report the event were subsequently jailed. The businessman John Edward Taylor went on to help set up the Guardian newspaper as a reaction to what he'd seen.
The speakers and organizers were put on trial, at first under the charge of High treason - a charge that was reluctantly dropped by the prosecution. The Hussars and Magistrates received a message of congratulations from the Prince Regent, and were cleared of any wrong-doing by the official inquiry.

Historians acknowledge that Peterloo was hugely influential in ordinary people winning the right to vote, led to the rise of the Chartist Movement from
which grew the Trade Unions, and also resulted in the establishment of the Manchester Guardian newspaper.
According to Nick Mansfield, director of the People’s History Museum in Manchester, "Peterloo is a critical event not only because of the number of people
killed and injured, but because ultimately it changed public opinion to influence the extension of the right to vote and give us the democracy we enjoy
today. It was critical to our freedoms."