Shot at Dawn : Lest we forget by teifidancer RANDOM THOUGHTS IN A DIGITAL AGE

Shot at Dawn : Lest we forget 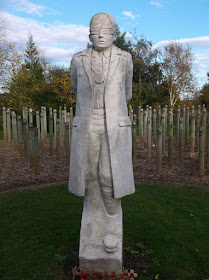 The Shot at Dawn Memorial is a British Monument at the National Memorial Arboretum near Alrewas, in Staffordshire, UK. It memorialises the 306 British and Commonwealth soldiers executed after courts-martial for cowardice or desertion during World War 1.

Never in the field of human conflict has so little been gained for the death of so many.

As the 100 year anniversary of the carnage of World War One approaches lets remember the 306 soldiers   this 11th November  who were brutally shot at dawn  by Britain for cowardice or desertion. For years they  were blighted with shame. stigmatised and condemned and history tried to forget them. Their names were never remembered on memorials and family’s often hid the truth, forced to live with a blemish on their good names for years, the shame was too much off a burden when in reality so many had died with honour.
General Haig, or Butcher Haig as he was known, when questioned declared that all men accused of cowardice and desertion were examined by a medical officer and that no soldier was sentenced to death if there was any suspicion of him suffering shell shock. As so often, he lied.
Haig not only signed all the death warrants but when questioned later on this issue lied repeatedly.The general's stubborn and ignorant belief was that anyone suffering shell hock was malingering. In fact in Butcher Haig's mid shell shock and malingering were the same thing.
Most off those sentenced were only after a short trial lasting no more than twenty minutes, at which they were denied legal representation and the right of appeal.
These executions occurred throughout the war, beginning with Pte Thomas Highgate on 9 September and ending with Ptes Louis Harris and Ernest Jackson on 7 November 1918, less than a week before the Armistice. For most of these young men, cowardice was far from the truth, it was the traumas of war, break downs amidst the unspeakable horrors they endured in the trenches, facing machine guns, exploding shells, barbed wire, bayonets, noise, and what would have amounted to a hell on earth. They were sick, cold, hungry, tired ,terrified, in fear and often alone. They saw their friends bombed, gassed and cut to pieces in spectacular numbers and they were reduced to trembling wrecks by relentless shellfire and the imminence of their own demise.
Today, it is recognised that several of them were underage when they volunteered and many had lied about their ages to fight for King and Country and many of them were actually suffering from a condition we now would have no problem in diagnosing as post traumatic stress disorder, or shell-shock, as it was known in 1916.
In the year 2000 a simple statue  called ' Shot at Dawn' was created byAndy De Comyn, it is modelled on Private Herbert Burden of the 1st Batallion Northumberland fusiliers. At 17, Private Herbert Burden was legally too young to be facing the German guns in the trenches of the Western front. However, his age did not save the teenager from facing a deadly volley of bullets at Ypres on the morning of 21 July 1915 – fired by his own comrades.An absence away from battle of little more than 48 hours saw Private Herbert Burden brought before a Field General Court Martial, pleading for his very life. But in complete disregard for his age was made an example of and paid the ultimate price.
His image stands, blindfolded and strapped to a wooden execution post, eternally awaiting the order to fire. Behind the statue are 340 other posts, each labelled with the names of those who suffered the same fate of being shot at dawn arranged  in the form of a Greek theatre around the statue, symbolising the tragedy that those events signify. The location of the memorial in the most easterly point of the Arboteum means that this is the first place to be touched by the dawn light.
He was one of 306 young British soldiers who met this  cruel fate, including 15 of my own fellow Welsh countrymen, induced by the horrors of this so called Great War. Private William Jones, of the Royal Welsh Fusiliers, was one of these who had volunteered for the army in 1915 while still a teenager. Assigned to the front line he was serving as a stretcher-bearer when he went missing on 15 June 1917. He had helped a wounded comrade to an aid post near their trenches, but then disappeared. He made his way across the Channel and home, but was then persuaded by his mother to hand himself in at the local police station in Neath. However, he was shown no leniency and was another of the 306 British soldiers who were futiley executed during the First World War.

I remember too  how the late Keir Hardie the M.P for Merthyr Tydfil and Aberdare raised his opposition to this cruel war. What is also forgotten is around 200,000 miners in  the South Wales valleys that went on strike at the height of the First World War. Not everyone signed up to the  jingoistic version of patriotism that continues to be spread. It is estimated that there were 20,000 Conscientious Objectors – admittedly a very small number as compared to the around 5 million men who joined the military, most of whom were conscripts. Objectors were a diverse group, but what is clear though is that they displayed remarkable conviction and courage, both as individuals and collectively.
There were between 700-900 conscientious objectors here in Wales during this period, and it was no soft option. It meant tribunals, imprisonment and hard labor. Conchies as they were  known were faced with humiliation, called cowards and shirkers. By 1916 Home Office intelligence reports revealed the extent of anti-war, revolutionary opposition in South Wales was large.
After the 75 year secrecy Act was lifted, members of the Shot at Dawn Organisation started campaigning for a pardon for those that had been essentially murdered in cold blood.Many now believe these men were executed to frighten other men into doing what they were told, intimidating them back into the trenches or scaring them into going over the top during an attack. Making an example of the executed men was a way of keeping others in line.
In 2006 all 306 men  eventually received a posthumous pardon, after a long campaign by their descendents. The shot at dawn campaign never asked for a blanket pardon, as claimed by many. They only asked for pardons for under aged soldiers, those suffering mental illness, and in cases of doubtful or illegal Courts Martial. Some names  subsequently went onto being inscribed upon war memorials alongside the names of the men who died fighting. The living relatives of those executed  at long last  at least gained some relief by the pardons.
Lets remember them all not as cowards or traitors, but as victims of a terrible shameful injustice that was clearly done and acknowledge that all these men were victims of war, who were not given the chance to survive,  tragically executed by their own comrades, often for little more than being frightened, confused young men. All of them heroes far braver than I could ever be. Shot for the sake of example. Victims  picked out and convicted as a lesson to others. All of the pardoned men deserve to be mentioned and their stories told, here is a list of their names. let us never forget them, always remember.

Where two names appear, the first refers to the name used by the soldier to register for service and the second is their real name. Researchers at the Shot at Dawn campaign discovered the true identities of those soldiers.

I will continue to support all those that strive to ensure that a radical anti-war message remains fully embedded in our hearts, without disrespecting others that fell.
In the words of Harry Patch the last WW1 veteran in Europe (1989 -2006)

' War is organised  murder and nothing else. Politicians  who took us to war should have been given the  guns and told to settle their differences themselves instead of organising nothing better than legalised murder.'

The following  touching documentary released before the men were pardoned investigates the tragic stories of the 306 British & Commonwealth soldiers shot for acts of cowardice and desertion during World War One.

Shot at Dawn - Word War 1 Documentary
Posted by Any Human Heart at 13:11