Nietzsche once described Dostoevsky as “the only person who has ever taught me anything about psychology” (Gide 168). 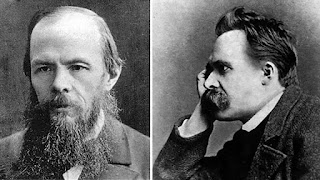 Nietzsche once described Dostoevsky as “the only person who has ever taught me anything about
psychology” (Gide 168). Upon looking deeper into the connection between the two men, it is apparent that both Nietzsche and Dostoevsky had complex philosophies, and it would be difficult, if not impossible, to compare their philosophical systems completely. Therefore, focusing on a specific issue like redemption will be more productive. Redemption is a topic directly connected to larger issues of considerable importance for both Nietzsche and Dostoevsky: morality, guilt, fear, and God. By examining the views of Dostoevsky and Nietzsche on these issues in relation to redemption, we will be better able to understand how Dostoevsky influenced Nietzsche’s philosophy.
…the judgment ‘good’ does not emanate from those to whom goodness is shown! Instead it has been ‘the good’ themselves, meaning the noble, the mighty, the high-placed and the high-minded, who saw and judged themselves and their actions as good, I mean first-rate, in contrast to everything lowly, low-minded, common and plebeian (Nietzsche GM I 2).

according to the law of nature, into two categories: a lower or, so to speak, material category (the ordinary), serving solely for the reproduction of their own kind; and people proper—that is, those who have the gift or talent of speaking a new word in their environment (Dostoevsky 260).
whip themselves, because they’re so well behaved; some perform this service for each other, and some do it with their own hands...all the while imposing various public penances on themselves—the result is beautiful and edifying (Dostoevsky 262).

What does the word ‘evildoing’ mean? My conscience is clear. Of course, a criminal act was committed; of course, the letter of the law was broken and blood was shed; well, then, have my head for the letter of the law…and enough! Of course, in that case even many benefactors of mankind, who did not inherit power but seized it for themselves, ought to have been executed at their very first steps. But those men endured their steps, and therefore they were right (Dostoevsky 544).
However much value we may ascribe to truth, truthfulness, or altruism, it may be that we need to attribute a higher and more fundamental value to appearance, to the will to illusion, to egoism and desire. It could even be possible that the value of those good and honoured things consists precisely in the fact that in an insidious way they are related to those bad, seemingly opposite things, linked, knit together, even identical perhaps. (Nietzsche BGE I

On my honour, friend,’ answered Zarathustra, ‘all you have spoken of does not exist: there is no Devil and no Hell. Your soul will be dead even before your body: therefore fear nothing any more!’ The man looked up mistrustfully. ‘If you are speaking the truth,’ he said then, ‘I leave nothing when I leave life. I am not much more than an animal which has been taught to dance by blows and starvation.’ (Nietzsche Zarathustra Prologue 6)

Throughout most of human history, punishment has not been meted out because the miscreant was held responsible for the act…but rather it was out of anger over some wrong which had been suffered, directed at the perpetrator…anger held in check and modified by the idea that every injury has its equivalent which can be paid in compensation, if only through the pain of the person through injuries. (Nietzsche GM II 4)

But here begins a new account, the account of a man’s gradual renewal, the account of his gradual regeneration, his gradual transition from one world to another, his acquaintance with a new, hitherto completely unknown reality. It might make the subject of a new story—but our present story is ended (Dostoevsky Epilogue)

To redeem the past and to transform every ‘It was’ into an ‘I wanted it thus!’ – that alone do I call redemption! Will—that is what the liberator and bringer of joy is called: thus I have taught you, my friends! But now learn this as well: The will itself is still a prisoner. Willing liberates: but what is it that fastens in fetters even the liberator? ‘It was’: that is what the will’s teeth-gnashing and most lonely affliction is called. (Nietzsche Zarathustra II Of Redemption).
Posted by Any Human Heart at 13:30