On Rememberance of wars past and present . 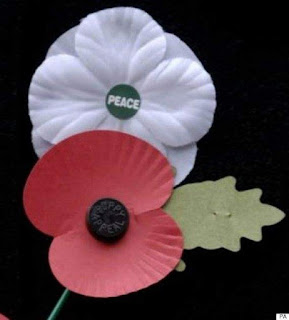 On Rememberance of wars past and present ....they are universal centralists and centrists and they really are to blame .. I see debate after debate on the red poppy and the white poppy. Each argues with the other. I see Mark Britton complain that the funds from the White Poppies do not go to the aid of the Veterans. I see Dave Sheldrake tell the sellers of the white poppy to stick it up their arses. Yet while they debate another right wing authoritarian despot called Trump sends the troops to the American frontier to steal an election. Figures like Trump have been doing it for years . One hundred years ago they were doing it. My Grandfathers working class generation were slaughtered on the fields of the Somme as they slaughtered the German working class. The young men of my son's age were killed in their thousands. The war to end all wars created fascism and finally ended the distinction between civilian and soldier. The military industrial monster still swallows the young men, brutalising them and conditioning them to obey. There are vast numbers of veterans in prison, living on the street and in the mental hospitals. I have sat with, treated many represented them at DWP appeals to not know what the military industrial complex does to them.

I am sorry Mark and Dave there are no moderate solutions to the military industrial complex. You can't be a centrist on these issues. It was that arch moderate Tony Blair who unleased Iraq and who became the midwife of Isis. It's the neoliberal arms dealers who use you guys and hypnotize you. Patriotism is the means of control and I have never really heard either of you campaign against the arms trade. And you Mark lay into Corbyn and Benn..yet you never mention the reality that all governments have channels of communication with the men of violence. Even Thatcher did even after the Brighton bombing ..yet you never say anything about that..
The military industrial comes grinds on as you criticise the peacemakers. Yet the universal soldier makes war possible as they support the peripheral issues..

No guys I am not a pacifist. World War 2 was the only just war. Every other war this century comes from the Imperialism of World War one. Trump is using the military as it's always been used outside of 1939 to 1945. Trumps soldiers have no real Medicare, they will be dumped back into the rust belt without homes suffering from PTSD...just as the Veterans of Vietnam were....WTF dies it take for you to wake up. There are no moderate answers . We the peacemakers and the messengers of reality have been killed by authoritarians from Caesar to Haig and Assad to Trump.. you are shooting the fucking messengers ...wake up and smell the odour of corpses and get real....
It is either Socialism or barbarism...get real...we are not the enemy. The military industrial complex is as are the ' moderates who maintain the system. Patriotism kill millions and the a Vanilla Isis of the far right are linked like Siamese twins symbiotically joined to the real thing. The problem is so few see it......let's dissolve the Royal British Legion with it's £300,000,000 of fixed assets and use it to help the 13,000 homeless ex service people, and those in prison. That would be a true act of remembrance.

"Chris Ramsbottom Pampling I took the trouble a few years ago to try and get my head round the RBL's expenditure, and a few years ago it was pretty clear that their major expenditure was maintaining their care homes and also remembrance activities. They were rightly criticised in the press. I went back and revisited their accounts over the weekend, and they are doing more to support individual ex-service people, and also other organisations who support such people, but you still have to get a referral to them from another organisation if you are a veteran. I mean, WTF? All you should have to do is quote your service number at them and you should get all the help you need! And as for their care homes: the Galanos one, about 5 miles away from me, is the most expensive one per week in the Midlands. Now I'm not talking about cost to the organisation - I'm talking about cost to the resident! My father refused to have anything to do with the RBL and never bought a poppy because they denied him help when he needed it, and every year he is being corroborated and validated in his stance."


At least 13,000 hero soldiers left HOMELESS after leaving the military - and almost all have PTSD

At least 13,000 of our war heroes are homeless after leaving the military, a Sunday People probe reveals.
Military charities said the shameful figure is a record high and the Government is failing those who risk their lives for Queen and country.
They also issued a stark warning that the crisis deepens every month.
Les Standish, who won the Military Medal in the Falklands War, said: “The Government has let these people down. These men and women were willing to fight and lay down their lives for this country and the only help available to them is from charity
Posted by Any Human Heart at 13:09