I feel the chill from Alabama... "white right men of a feather treat women together"

I feel the chill from Alabama... 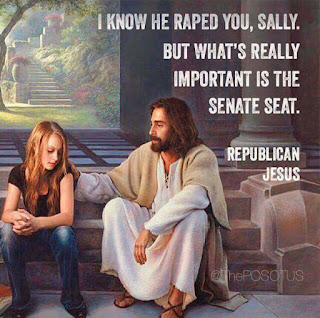 It's bitterly cold as I walk down the Jeff Hill to the bus station.the stars and moon can clearly be seen. I think of the day ahead. It will be a quiet day and be the last session of the Genesis course.
My mind moves to Alabama .Here a man like Trump,.Ray Moore who treats women like objects; while pretending to be a Christian holds a narrow 2% lead in the polls. One of Moore's alleged victims was only 14 at the time of the allegations.

It's no accident that Trump supports Moore the Republicans narrowly control the Senate by 52 to 48. A loss by the Republicans frightens them...it frightens them more than the allegations of the vuctims. But in addition it's interesting that similar allegations were made at Trump last year and continue to surface. Well as they say "white right men of a feather treat women together"
Polls suggest a 25% per cent turnout. It depends which 25% turnout. Even the existing Senate Republicans want an investigation into Moore if he wins. Yet the political fears of the alt right and it's lackies want such behaviour forgotten. They fear what it will reveal.
I saw an interview with a woman who said she would prefer to vote for an assaulter of women rather than a Liberal Democrat.. the founding fathers must be spinning in horror.
The night night be cold but I feel the chill in my soul even more when I think of the nature of American politics..
Posted by Any Human Heart at 12:57