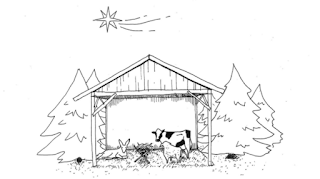 "A nativity scene without Jews, Arabs, Africans or refugees." specially for those keen on protecting the borders and getting vtheir country back........


Martyn:s Christmas Carol...So tell me...my fine Christian Bluekippers and you too, you devotees of the Libertarian Right.. cast your mind back to the Nativity scene..the holy family are refugees...they have been in exile in Egypt fleeing the wrath of Herod...i wonder how the Egyptian people received them...Mary is an unmarried mother ...the family is homeless ..they are squatting in a tax payers barn...the shepherds are on minimum wage and a zero hours contract.. the wise men followed a star they could not find what they were looking for at home and choose exile to follow their dream...Britain first would be very upset with all these Jews Arabs and Africans in the scene.

The nativity scene was made up of exiles. They were all homeless.. send em back you moronic bluekippers as you every the nature of the first Christian Christmas..for all the participants were far from a place called home. In the 2000 years since it has been perverted to promote the family unit.


The discourse alienated those who live alone, who are lonely and outcast. It became a festival of smugness and conformity. The search for a home and a place of belonging did not belong to the individuals in the Bethlehem nativity scene.. did it?

Yesterday I heard a wonderful story set in Neath of two elderly women in Queen Street in Neath who took a homeless young woman into a cafe and fed her. Since 2010 homelessness has soared . And still you hear the idiots on social media moan that it is homelessness out of choice ..the morons neither understand the first Christmas or the nature of the economic system.. look around you..you idiots ..do you notice more people on the street. ? ASK YOURSELF WHY..and do some research about homelessness and Christmas..perhaps you will have ghostly visitors my fine blue kippers..
Posted by Any Human Heart at 13:46