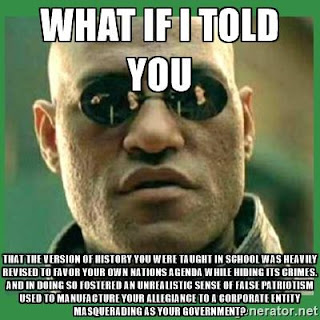 What if?.... matrix thoughts on a very cold Powy`s Friday
That system is our enemy. But when you're inside, you look around, what do you see? Businessmen, teachers, lawyers, carpenters. The very minds of the people we are trying to save. But until we do, these people are still a part of that system and that makes them our enemy. You have to understand, most of these people are not ready to be unplugged. And many of them are so inert, so hopelessly dependent on the system that they will fight to protect it."

"What you know you can't explain, but you feel it. You've felt it your entire life, that there's something wrong with the world. You don't know what it is, but it's there, like a splinter in your mind, driving you mad."
I know you're out there. I can feel you now. I know that you're afraid... you're afraid of us. You're afraid of change. I don't know the future. I didn't come here to tell you how this is going to end. I came here to tell you how it's going to begin. I'm going to hang up this phone, and then I'm going to show these people what you don't want them to see. I'm going to show them a world without you. A world without rules and controls, without borders or boundaries. A world where anything is possible. Where we go from there is a choice I leave to you..

""Complain, complain, that's all you've done
Ever since you lost
If it's not the Crucifixion
Then it's the Holocaust."
"May Christ have mercy on your soul
For making such a joke
Amid these hearts that burn like coal
And the flesh that rose like smoke."


On Radio 4 I hear the rank tones of Michael Gove rave about British judges over and over again...mantra like.. oh goody gum drops u am to be stuck on Brexit Island with these idiots...and at the mercy of the fragrant tones of the harsh voice and votes of the brutal Calvinism of Arlene Foster...its so great getting your country back...welcone to the matrix. I include this observation by Grham Mallaghan

" Graham Mallaghan Yup, being in the UK at present is like being trapped in the darkest recess of Charles Dickens' psyche, or in some sort of degenerate Lovecraftian realm presided over by utterly indifferent monsters.

A collection of absurd, amoral, and incompoetent grotesques rule over us, polluting and twisting all that is positive and ruining lives without the slightest regard for the men and women they break and taint.

I was pointed towards a clip on YouTube this morning, the caption for which boasted "Rees-Mogg destroys Theresa May", in some debate or other.

In what sort of world does such a reactionary enjoy support and adulation? Even his name makes him sound like a corrupt and venial official from a Dickens novel.