The Alt Right: a Guide for the activist.....

The Alt Right: a Guide for the activist..... 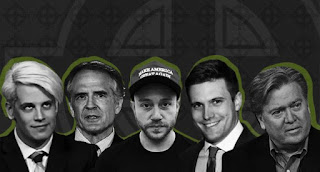 One of the extremist-related “buzz words” that people may encounter in 2016 is “Alt Right.” The term “Alt Right” originated with extremists but increasingly has found its way into the mainstream media. Alt Right is short for “alternative right." This vague term actually encompasses a range of people on the extreme right who reject mainstream conservatism in favor of forms of conservatism that embrace implicit or explicit racism or white supremacy.
People who identify with the Alt Right regard mainstream or traditional conservatives as weak and impotent, largely because they do not sufficiently support racism and anti-Semitism. Alt Righters frequently disparage the conservative movement by using the derogatory term “cuckservative,” popularized in 2015. The term “cuckservative,” a com­bi­na­tion of “con­ser­v­a­tive” and “cuck­old,” is used by white supremacists to describe a white Chris­t­ian con­ser­v­a­tive who pro­motes the inter­ests of Jews and non-whites over those of whites.
Though not every person who identifies with the Alt Right is a white supremacist, most are and “white identity” is central to people in this milieu. In fact, Alt Righters reject modern conservatism explicitly because they believe that mainstream conservatives are not advocating for the interests of white people as a group.

HOW DID THE TERM ALT RIGHT ORIGINATE?
White supremacist Richard Spencer, who runs the National Policy Institute, a tiny white supremacist think tank, coined the term “Alternative Right” as the name for an online publication that debuted in 2010. The online publication changed hands in 2013 when Spencer shut it down. It was soon re-launched by Colin Liddell and Andy Nowicki, who were former writers for Alternative Right. Spencer went on to found another online journal, Radix. Both Alternative Right and Radix act as forums for racists, anti-Semites and others who identify with the Alt Right.
The term “Alt Right” is not the only term used to describe this movement. Some of its adherents use other, similar phrases, such as the “New Right” and the “Dissident Right.” They all refer to the same race-infused brand of extreme conservatism.

WHAT IS THE IDEOLOGY OF THE ALT RIGHT?
Alt Right adherents identify with a range of different ideologies that put white identity at their centers. Many claim themselves as Identitarians, a term that originated in France with the founding of the Bloc Identitaire movement and its youth counterpart,Generation Identitaire. Identitarians espouse racism and intolerance under the guise of preserving the ethnic and cultural origins of their respective counties. American Identitarians such as Richard Spencer claim to want to preserve European-American (i.e., white) culture in the U.S. As Michael McGregor, a writer and editor for Radix wrote in an article in the publication, Identitarians want “the preservation of our identity--the cultural and genetic heritage that makes us who we are.” Identitarians reject multiculturalism or pluralism in any form.
Others in the Alt Right identify as so-called radical traditionalists, people who want to preserve what they claim are traditional Christian values but from a uniquely white supremacist perspective. The Traditionalist Youth Network is a group that espouses a white supremacist form of Christianity and promotes “family and folk” and separation of the races.
Others in the Alt Right simply identify as white nationalists, who want to preserve the white majority in the U.S., claiming that whites losing their majority status is equivalent to “white genocide.” They favor propaganda on subjects such as immigration and “black crime” as “evidence” of this ostensible ethnic cleansing of whites.
There are people with other beliefs who fall under the umbrella of the Alt Right but all share a fixation on white identity as central to their ideology. Different segments of the Alt Right may refer to themselves as neo-reactionaries (those who reject liberal democracy and ideas associated with the Enlightenment. Some neo-reactionaries refer to their theories as the “Dark Enlightenment.”) Others may call themselves “race realists” or alternately “HBD” advocates, a reference to human biodiversity (those who believe that one’s race governs traits such as behavior and intelligence—with non-whites being inferior to whites). However they define themselves, Alt Righters reject egalitarianism, democracy, universalism and multiculturalism.
A number of Alt Righters are also blatantly anti-Semitic and blame Jews for allegedly promoting anti-white policies such as immigration and diversity. Alt Righters mock conservative support of Israel as anti-white. The woman behind the Alt Right Twitter handle recently wrote, “I support ALL Jews living in Israel or a defined area.”

WHO MAKES UP THE ALT RIGHT?
The Alt Right is an extremely loose movement, made up of different strands of people connected to white supremacy. One body of adherents is the ostensibly “intellectual” racists who create many of the doctrines and principles of the white supremacist movement. They seek to attract young educated whites to the movement by highlighting the achievements and alleged intellectual and cultural superiority of whites. They run a number of small white supremacist enterprises that include think tanks, online publications and publishing houses. These includeRadix and Washington Summit Publishers, both run by Richard Spencer; Counter Currents Publishing, run by Greg Johnson; American Renaissance, run by Jared Taylor; and The Right Stuff, a political and social blog with a number of contributors.
Another strand of the Alt Right consists of younger racists savvy with social media and Internet communications. In recent months, a number of these Alt Righters have promoted Donald Trump’s* presidential bid, seeing the populist candidate as someone tougher than so-called “cuckservatives,” thanks to his controversial stands on issues ranging from immigration to Muslims in America
Alt Righters like to try to use terms such as “culture” as substitutes for more lightning rod terms such as “race,” or promote “Western Civilization” as a code word for white culture or identity. They do not make explicit references to white supremacy like the “14 words” a slogan used by neo-Nazis and other hardcore white supremacists. The “14 words” refers to the expression, “We must secure the existence of our people and a future for white children.” Even though Alt Righters share the sentiment behind the “14 words” they’re more inclined to talk about preserving European-American identity.

WHAT IS THE IMPACT OF THE ALT RIGHT?
Though the Alt Right is not a movement, per se, the number of people who identify with it is growing. It includes a number of young people who espouse racist and anti-Semitic beliefs. It has a loud presence online. The intellectual racists who identify as part of the Alt Right also run a growing number of publications and publishing houses that promote white supremacist ideas. Their goal is to influence mainstream whites by exposing them to the concept of white identity and racial consciousness.
The term “Alternative Right” is a conscious attempt by these people to stake out part of the conservative spectrum and to claim that they deserve a voice in conservative conversations. The term “Alternative Right” explicitly avoids the use of the word “race” and conjures rebel or anti-establishment figures—often attractive to youth. The “Alt Right” is in a sense an attempt by white supremacists to infiltrate conservative conversations that have largely deliberately excluded them in recent decades.
Posted by Any Human Heart at 13:06