From the Crisis of Science comes Existentialism..Husserl`s gift or perhaps curse?

From the Crisis of Science comes Existentialism..Husserl`s gift or perhaps curse? 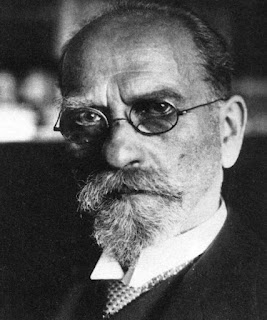 The Existential Sacrifice of Husserl

“From the defects of Science...there proceeds there proceeds the philosophical demand for a presuppostionless beginning for a new life of knowledge, a truly radical life., the demand for a life inaugurating a science founded on an absolute justification...But this absolute radicalism for those who wish to become philosophers in the most authentic sense of the word implies submitting to a corresponding decision that will engage their life in an absolute radical manner, a decision which will make of their life an absolutely devoted life. This is the decision through which the subject becomes self determining, and even rigorously so-to the very depths of their personality.-committed to what best in itself is the universal realm of intellectual values and are committed, for their entire life, to the idea of the supreme good..the subject chooses supreme knowledge as their veritable vocation, for which they decide and is decided once and for all..”..... Cartesian meditations Husserl 1935

Husserl asks us to challenge all the excepted assumptions of empirical research he gives us a powerful credo of phenomenology. Husserl`s approach is difficult to obtain or to understand. However we might think of it like this. He begins with the defects of Science. In his 1935 Prague lecture he uses Planck`s quantum “Indeterminacy” or Einstein's “relativity” to undermine Newtons classical physics while still arguing that physics is an exact science. We might even see echoes here of Jasper's Existential impatience with Science.

It is not the exactness of exact science that troubles Husserl but the matter of fact claims of its self belief that it is objective. It is tempting to see exactness and objectivity as the same thing. Yet to Husserl it leaves a gap in terms of the subject-object differential.. consider two words in this sentence. 2Things do not exist by virtue of there explanation” or do they? . What is this EXIST if not an unaware explanation. Think of this sentence then 2 c I am the evidence of my own intuition. In other words the subject is its own object of investigation and the evidence is , its own state of absolute subjectivity.. Thus we have a Science of Psychology and a separate science of Phenomenology.

The recent malaise I heard spoken by many is that science and philosophy are drifting apart. That is too vague. What does it really mean under analysis? What drifts apart?. It is already intrinsic to the subject that splits its existential and theoretical being. Existential means being my own presence in the world. Theoretical means being the subject of some other impersonal evidence.. So simply reductionism would be impossible but for the complexity of mind

The world in all its pregiveness is the one in which we too are given an existential subject. “Here I Am” says it all in transparent obviousness. “Thats how things are, no question of it" But this unproblematic natural attitude in the same objective world shares the same objective world from which a theoretical approach of science appears. Science doe not question how “things are as they are” and we regularly switch psychologically from one attitude to another. We switch convictions from a transparent view of “How things are” and forget an inference from them that gains its entire hold on our certitude.

So it is that science – theoretical certainty- comes entirely to occupy the field of our natural attitude and is thereby “naturalised” as the only world view. We thus create a world in which we are both explained by and are the explainer of laws which govern its discovery. Thus I simply have forgotten how exactly I am in that world and not by any religious sense but simply how appearance is given in that world. .

We fail to explain consciousness and should ask Heidiger`s question What is, is? That natural attitude “what is” is taken for granted. By stressing “what is” we awaken our uncertainty of it being a given So I see for once how the world is already placed for me in it. For Husserl Descartes “Cogito” is an error and therefore no matter how far scepticism goes it remains in the natural attitude and the pre-giveness of the world we are in. This is the paradox we must grasp that science is only possible on the basis of an existential sacrifice and a forgetfulness of being. Therefore existentialism is born out of this crisis of science.
Posted by Any Human Heart at 16:10