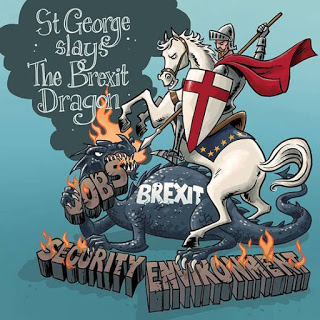 St George's Day - patron saint of.... lots of places. St George was born in Palestine, he allegedly killed that serpent in Beirut, he is the patron saint of the country of Georgia of course, the Greek army, lots of German towns, Malta and Gozo, the Romani people of Eastern Europe - and two of Russia's highest decorations are called the Cross of St. George and the Order of St. George. And so the list goes on.

So on St George's Day - let's celebrate his multinational influences and lance the myopic Brexit dragon that feasts upon closed notions of identity.
Posted by Any Human Heart at 13:12