Operation Tân...what happens in Wales when a vast Tory majority occurs...looking back to 1980 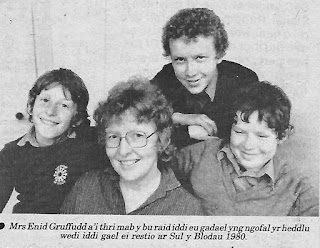 Operation Tân (Welsh pronunciation: [ˈtɑːn], "fire") was the name of a series of police raids in Wales between 1 October 1979 and 30 September 1980. The aim of the operation was to identify "Welsh extremists" responsible for burning second homes with English owners.
It has been criticised as a more generalised trawl of left and nationalist milieux within Wales
For more details see Political policing in Wales" John Davies, Lord Gifford, and Tony Richards. (1984, Cardiff: Welsh Campaign for Civil and Political Liberties
Over the palm sunday weekend 1980 the police and special branch carried out 'operation fire' which saw police forces across wales raid the homes of dozens of people and make scores of arrests (frequently illegally).

The Welsh Socialist Republican movement had been formed in january 1980. They published a journal called 'socialism for the welsh people'. The  WSRM had 12 acive branches in Wales and produced a weekly paper y faner goch (the red flag) and a monthly magazine 'the welsh republic'. As well as organising among working class people across wales welsh republicans established fraternal links with republicans in ireland and organised a protest in wales to support the irish republican hunger strikers (welsh police attacked the protest and broke it up).

Developments like this in wales clearly caused great alarm in the upper echelons of the British state - they had their hands full with events in northern ireland at the time - and it seems clear the emerging welsh republican movement was singled out for special treatment by the thatcher government and the British intelligence services. The palm sunday raids in 1980 hadnt succeeded in destroying the welsh republican movement so what became known as the 'conspiracy trial' took place in 1982.

In 1980 and 1981 a number of small explosive devices had been planted at places strongly identified with the british state in wales - army recruiting offices, tory party offices etc and in late 1981 there was an explosion at the welsh office in cardiff (no people were injured in any of these explosions). Different groups claimed responsibility for these devices - one was called the 'workers army of the welsh republic' and another 'the sons of glyndwr'.

In the following months a number of members of the welsh republican movement were arrested and detained on suspicion of causing explosions. One of the defendants (Dafydd Ladd) admitted the charges but others pleaded not guilty and went on trial early in september 1982 with the trial ending two months later. All except one of the defendants was found not guilty of all charges, and none of them was found guilty of carrying out the explosions. The jury accepted the defence case that there was a police conspiracy against the defendants and believed the defendants when they said evidence had been planted, confessions altered and manufactured and had been extracted under 'duress' ie they were beaten and abused by interrogators.

The trial cost over 500,000 pounds - millions in todays money and while the convictions it resulted in were neglegible at the end of this period the nascent republican movement in wales had been shattered and has never seriously re-emerged - maybe that will change with the affects of brexit on wales and a landslide tory government at westminster? Knowing what we now know about the activities of the british state in ireland did the 'WAWR' and 'sons of glyndwr' really exist or were these the actions of intelligence operatives or agent provacateurs