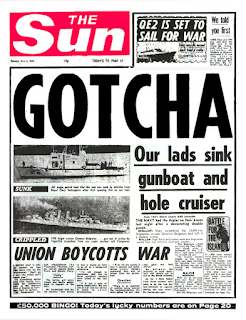 The Sun on the sinking of theBelgrano in May 1982.

Authoritarian populism was a term coined by the cultural theorist Stuart Hall to describe Thatcherism. He argued that Thatcherism was a popular reaction to the British post-war settlement, mobilized along right-wing lines and aiming to strengthen the State.

A good deal of evidence from opinion polls suggests, as demonstrated notably in the work of Ivor Crewe,[1] that Mrs. Thatcher had little success in winning over the population. Indeed, polls suggest that opposition to Thatcherism grew as time went on.

Bob Jessop et al. argue, along similar lines, that "Thatcherism must be seen less as a monolithic monstrosity and more as an alliance of disparate forces around a self-contradictory programme."[2]

The article below is up to date research on the rise of Ukip. The authors comapre it to the front nationale in France

Populism, the ‘people’ and the illusion of democracy – The Front National and UKIP in a comparative context


The 2014 European elections confirmed the prominence in the media of what is commonly called the far right. While parties such as the Front National and UKIP were successful in the elections, their performance has since been exaggerated and they have benefited from a disproportionate coverage. Aiding their apparently ‘irresistible rise’, their normalisation was greatly facilitated by their description as ‘populist’ parties. However, while this term ‘populism’ has been almost universally accepted in the media, it remains a hotly debated concept on the academic circuit, and its careless use could in fact prove counterproductive in the assessment of the current state of democracy in Europe. Instead of focusing on the reasons behind the rise of these parties, similarities and differences already widely covered in the literature, this article hypothesises that a skewed and disproportionate coverage of the European elections in particular, and the ‘rise’ of ‘right-wing populism’ in general, have prevented a thorough democratic discussion from taking place and impeded the possibility of other political alternatives.
Posted by Any Human Heart at 14:06