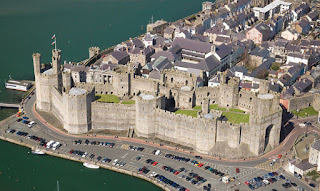 The break in North Wales in Caernarfon  to be precise brought home some powerful thoughts and perceptions long acknowledged but never so powerfully realised before. The sheer size of the castle in Carnafon brings home the reality of military occupation. It was 750 years ago yet you still realiser how the domination of the town and the port shows how thoroughly the area was garrisoned. The castles of Edward 1 at Harlech,Caernarfon  Beaumaris, Conway show the iron heel of the Anglo Norman state across north Wales.

It wa this Anglo Norman state that learnt the model that made Wales the first colony, the model that would be used in Ireland and in Sicily. In the castle of Caernarfon on a gigantic Chess board are the figures of the conquest. The largest is Edward Longs hanks himself brooding, in control;l and dominating all the others. I saw further evidence the line of the princes of Wales from imagination, through Vortigen created , constructed, the mysterious gap from the last Welsh ruler to the present Saxe-Coberg- Gothas claiming the title. There were films of previous Investitures from 1911 and 1969. Each gave lip service to the Welsh identity but each slammed the boot of the English state both consciously and consciously on the Welsh identity. I remembered 1969 I was 11 at an English Prep school, We had the events pushed down our throats..there was nothing said to us of Welsh history or culture .

Within the Welsh Fusiliers museum within the walls of the castle I heard the tunes of the song the British Grenadiers playing like a leitmotiv of oppression of formulated created history...and I felt sick We saw and learnt within the castle of how Edward used the legend of the dream of Maxen Wledig , how it was used by Henry Tudor. Yet strangely not a word of how the Anglo Saxon invaders were them selves the enemy faced by the Celt and of the legends of Arthur Not a word given, not an explanation sought.

It was a military occupation first and foremost and brought home to me even more powerfully than before of this process. One branch of my family comes from North Wales and I have always been aware of how the Arthurian legends come from Wales, from Brittany and of how the Imagination form the base of so much of the borrowed, purloined culture of the Anglo Norman state. A returning Arthur would have by definition opposed them, would-be have created an Celtic faith far different from the patriarchal war processing state that the Anglo Normans imposed. Yet that was something I realised much later.

Walking around town we pass a book shop where I see in the window a book by Gideon Brough called” The rise and Fall of Owain Glyn Dwr. The book is very important. It stresses the Welsh revolt here as an important part of the Hundreds Year war. For too long this revolt was seen as a sub plot of a rebellion by an obscure Welshman against the King. Brough sees this campaign as part of a wider European war. He stresses the role of Glyn Dwr not only as a soldier but also as a thinker and as an administrator. He stresses the role of a separate rebel state in terms of law and administration and recognises its value to a sense of Welsh identity.

GlynDwr brought down the Edwardian state in Wales, he had real roots in the Welsh population. We cannot claim him as the founder of a modern Welsh nationalist identity but we can rescue him from obscurity and denial. They never told me about him at Prep School I just heard of the Edwardian conquest. They never told me of Hywell Dda, of Gruffudd Ap Llywelyn, and of the knowledge, culture and learning within Wales prior to the building of Carnafon and the Anglo Norman occupation.

I owe a massive debt to several individuals one was Professor Glanmor Williams who taught me Welsh history at University another was Walter Davies of Dynevor School teaching me of Welsh History for A level and how the role of the French revolutions influence on Wales , and the slate and lead mines of North Wales gave me two excellent essays for my A Levels allowing me to go to University in the 1970s. I have been led to discover both the land, the people from where a great part of my ancestors came from.

On Monday I stood in Blaeanau-ffestiniog and remembered the slate industry and the lead industry and how it made possible all the things I am now. The land of my people comes back to me. It was hidden a long tome ago. It was ignored my the Anglo Norman State, the English Prep School and yet it retuned. My Son is Morgan Rhys, he speaks with the accent of his ancestors and I still with a Midlands accent feel innately Welsh and aware of my history and origins. Am I local/ I dont sound it and yet I feel I am part of that history and peoples. I loath the English state and its little England outlook. I return from North Wales as the UK buckles and begins to break apart. I whispered in the Eagle tower in the ear of Llywelyn ap Gruffudd . Wales will be free again. And I know that I must learn Welsh and complete the process that began many years ago. 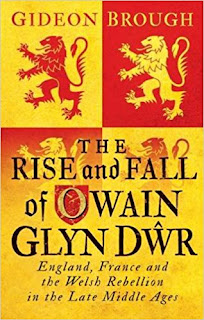 Owain Glyn Dwr is a towering figure in Welsh history, best known for a revolt against the English crown in the early years of the fifteenth century. Despite facing overwhelming odds, Glyn Dwr was successful enough, for a time, to re-establish native rule in a Wales deemed to have been conquered over a century previously. The rebels proved to be surprisingly capable opponents during the ensuing conflict. Militarily, their campaigns were well planned and more efficiently executed than those of the better-equipped and highly regarded English troops, who heavily outnumbered the rebels. Flexible and adaptable, the Welsh demonstrated that they were effective soldiers, commanded by an excellent leader who was supported by talented subordinates. Although Henry IV sent some of his finest commanders against them, notably the earl of Arundel, the Percys and the Charltons, the Welsh repeatedly prevailed. King Henry, a crusader and renowned warrior, also failed in his campaigns against Owain's rebels. The conflict with Wales was a vital proving ground for his heir, the future Henry V. Due to their successes and leadership, the rebels' military and political strategies evolved, enabling Glyn Dwr to call himself 'Prince of Wales', in direct challenge to the English heir. The Welsh, scorned by the king as being a people of meagre reputation, also displayed an unexpected political maturity, creating a native parliament which, in probably its third sitting, produced a charter outlining their vision for an independent Welsh future. In addition, Glyn Dwr established diplomatic contacts with France, Brittany, Scotland, both popes, Irish lords and rebel English factions. These diplomatic initiatives led to a treaty with France, followed by the insertion of a sizeable French expeditionary army into Wales: a hugely significant event in British history. England's efforts to kill the rebellion met with repeated defeat, until Henry's diplomats skilfully managed to become involved in the power struggle at the heart of the French court. Their quiet, barely perceptible but brilliant achievements gained England a critical advantage, enabling it to defeat the rebellion politically, then militarily. Although the Welsh revolt did not secure lasting political independence and therefore proved unsuccessful, it did spur into action a reluctant rebel, who is portrayed in this study not only as a warrior of notable prowess, but moreover as a thinker, diplomat and an exceptional leader.

THE DREAM OF MAXEN WLEDIG