Of Dying Gods and Gods reborn at Easter Weekend

“I'll tell you a secret.
Something they don't teach you in your temple.
The Gods envy us.
They envy us because we're mortal, because any moment might be our last. Everything is more beautiful because we're doomed.
You will never be lovelier than you are now.
We will never be here again.” 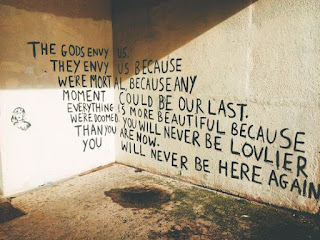 Of dying Gods and Gods reborn ....It's Good Friday and after 2000 years of the Judeo Christian world view so few understand the original let motive of god's slain and gods reborn. Osiris in Egyptian myth bears so much resemblance to the Christian myth , in Norse mythology Odin hangs on the tree and conquers death and learns the wisdom of the runes. Buddha sits below the bodhi tree and learns enlightenment. The tree the cross, the sacrifice to learn and transform the world. But to transform into what...I am tired of the Sky Father's the celestial dictators who insist that there is only their truth. Without the insistence of only one truth we would avoid the wars of ideology, the wars of forced conversion of the heathen, the infidel and the heretic. If there is ever a need it is for a saviour to free us from Saviours. Theresa May lectures us on Christian values and yet she takes to Saudi Arms dealers and supplies arms around the world. Give me Marcus Aurelius anytime with his insistence to ask not what someone says they are looking instead at what they do. Do we survive death? I don't know but I turn back to Homer when he says that the gods envy us because we are beautiful as we will never be again as we are at this moment. They envy us because each of us are unique, our experience varied our soulless original. Do the gods die with us killed by gas in Syria,? shot to pieces by the arms trade that our leaders pedal? Do we die condemned by the universal soldier who just obeys their orders who has been taught to confirm. Do we die by hunger and neglect or do we end the rule of the dark gods we create be they human or divine...Perhaps the death of the gods is long overdue and we must see the divine within all of us, the sacredness of ourselves and put original sin back with St Augustine and the celestial dictators of the monotheistic faiths. Perhaps the gods once dead should stay that way..I am with Homer and the Pagans ......

The female spirituality, Isis, Freya ignored. The definition of an Apostle in Christianity is someone who has seen the risen Christ. Yet it was Mary and Martha who saw him first and yet they are not Apostles. You only rise again if a masculine language tell you so, Christ rises to become the medieval celestial dictator, Osiris is give a new golden phallus,,yep its men who tell the stories of these celestial dictators and of the only truth there is. What a surprise. Give me the divine feminine any time......
Posted by Any Human Heart at 13:38