Gibraltar ..a good little war to keep them quiet and patriotic?...... 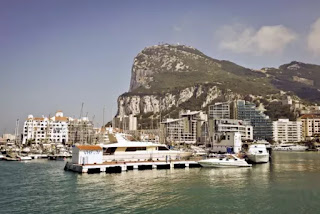 The old ways always works.. Xenophobia breaks out. Theresa May will defend Gibraltar like Margaret Thatcher defended the Falkland islands. Trump will intervene in North Korea with or without China's support. Unpopular leaders both use overseas adventuring to deflect electorates attention away from troubles in domestic policy. Meanwhile Spain drops it's opposition to an independent Scotland joining the EU .I wonder how Theresa May's mind really works works ....The old right wing agenda and dictum always works...A good little war.....Keep the patriotic working class quiet..Kill off a few ..And keep the twatriots quiet as *our boys" are seen yomping through the Olive groves southern Spain ...Then call a general election....The old method always works always does ...No change there..Just at the moment when benefit cuts bite...Keep them distracted....It always works.....ERM is war an instrument of a an ultimate hard Brexit ?


A new Vietnam in North Korea? Military planning is underway. A new war to distract the American electorate just as the Russian connections begin to emerge .. just imagine Trump tweeting throughout a war ...ugh
Posted by Any Human Heart at 12:17