A hard Punch for a Hard Brexit..Steven Woolfe et al

“The lion cannot protect himself from traps, and the fox cannot defend himself from wolves. One must therefore be a fox to recognize traps, and a lion to frighten wolves.” 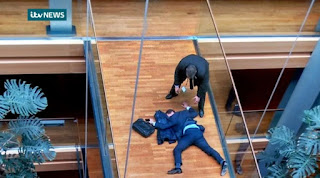 Let all the poisons that are in the mud rise to the service. Yes those poisons have been there since June23rd. The sorcerers apprentice is a story about releasing the forces that he cannot control. Its called Boris and Nigel's story. It is true that politics can be a dirty business where there can be simmering angers and bitter dislike. But in the years I have had experience of such things and of the people I have come to dislike I have never taken my Id, released it and punched colleague. I may have fantasied about it, but the difference is I have never done it. The measure of it all is a knowledge of our shadow and that of the political party you belong to. The very act of allegedly physically striking someone comes down to a revelation of yourself and your party. UKIP has revealed theirs and it is very unpleasant. There are however very reasonable people within the party and they must consider what this reveals about its nature. 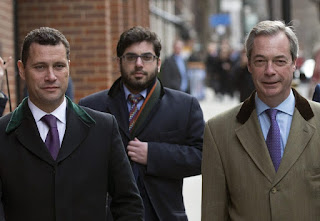 In my recent debate with Benjamin Mackenzie you can see the” pressure cooker within”. He clicks hos pen, never looks at me and rustles his papers. It shows what certain Kippers think of the Left. In South America such attitudes have led to a very serious situation. The last time I hit anybody was when I was 8........what is this party and its attitudes and what does it say about us all?

And so we have it......a brawl in the European Parliament. What were those words of Nigel Farage on June 24 .....a victory for ordinary decent people?......this shower represents us in Europe.? the people who got our country back?. I am ashamed but far from shocked. They summoned the demons of prejudice and dislike of blame and chauvinism. They summoned the crown prince of Nationalism and they experiencing the consequence of their actions. They have looked into the abyss and the abyss looks back, the monsters unleashed have possessed the fragile egos of the far right.....and what happens it ends in fisticuffs.....they have fooled many decent people I know.....but they have fed some very unpleasant people as well. I have felt the abusive words from many of this latter group. Two weeks ago I was debating the claim from a young kipper that Hitler was a socialist. Now what do I see behaviour in Parliament that was seen in the Reichstag in the early 1930s. Parliamentarians fighting like the SA of a certain party. The shadow of the hard right is with us, the ghosts and remnants of Nationalism haunts us...and the smell of Weimar and the bullies of Fascism return and seek to possess this hateful, narrow society that we are now. I wonder when people stop talking about bullies within Momentum and the Left and see where the real threat is.....beware Nigel you are inheriting the whirlwind and so many gentle tolerant people and ideas are at risk of being swept away.....this is the behaviour of the BNP not a party of ordinary decent people.......this is a consequence of the Brexit vote and of the bitter and vile tensions lurking within us all......something is very sick in this society...." its an needed garden things rank and gross" flower and develop...and I am sick at heart. There is a new nasty party to be launched it has the Aaron Banks money and a hard leader who settles disputes in the party with fists.......things fall apart


The shadows are gathering. Denial is an important thing. It is alleged that Steven Wolfe was talking about joining the Conservative party. He said that Brexit, Grammar Schools and immigration meant that he and his friends now had a role there. And yet what is interesting when I raise the fact that kippers are are leaving and joining the Tories, I am abused to a new level and denial from those that remain grow shriller and more violent. Last night on Neath Voice for Everybody a phrase was used to describe myself and others as “Anti British”..the demons stalk the land. And the sound of the phrase makes me shudder as the the Thatcher revolution continues. Who will they come for next...the unemployed, the single parents, for you?