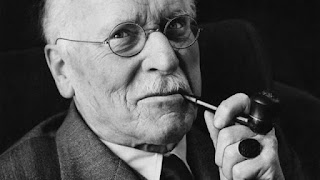 As the founder of one of the most influential schools of psychological thought — analytical psychology — Carl Jung (also known as CG Jung) experienced what today we might call a form of psychosis. It probably wasn’t a complete psychotic break, because Jung still functioned in his daily life.

His psychosis began when he was 38 years old, when he started finding himself haunted by visions in his head and started hearing voices. Jung himself worried about this “psychosis” — things that today we’d might say were consistent with symptoms of schizophrenia (a term he also used to describe himself during this period).
Jung didn’t let these visions and hallucinations slow him down, and continued seeing patients and actively engaging in his professional life. In fact, he so enjoyed the unconscious mind he had unleashed, he found a way to summon it whenever he wanted.

Most people who have psychosis or hallucinations seek to minimize their symptoms, to drown out the visions and hallucinations. After first experiencing these visions, Jung did just the opposite. He found the experience so exhilarating and full of unconscious content that could be further examined, he didn’t just wait for the visions to come on their own. Instead, he encouraged their appearance throughout the day, for years.
After dinner each night and inbetween seeing patients during the day, Jung spent time in his study inducing the visions and hallucinations. He did this not through the use of any kind of drug, apparently, but instead through his own personal methods that allowed his unconscious mind to become totally open and flowing forth.

2. Jung recorded everything from his psychosis.

Although modern recording equipment didn’t exist in 1913, when the hallucinations and visions began, Jung nonetheless kept a meticulous record of his psychosis. Jung would write down everything he saw and heard in small black journals. He later transferred some of this material into a large, red, leather-bound journal.
Over the course of 16 years, Jung recorded everything he experienced in these unconscious journeys. Some of the material ended up filling 205 large pages in the red book. The book consists of intricate, colorful, wildly detailed drawings and writings. “The Red Book,” as it was later called, stayed locked up in a vault after Jung’s death. It was finally published in 2009 asThe Red Book and is now available for sale.
The New York Times describes the story told by the Red Book:

The book tells the story of Jung trying to face down his own demons as they emerged from the shadows. The results are humiliating, sometimes unsavory. In it, Jung travels the land of the dead, falls in love with a woman he later realizes is his sister, gets squeezed by a giant serpent and, in one terrifying moment, eats the liver of a little child.

While Jung described his visions as a type of “psychosis” or “schizophrenia,” those terms meant something different a hundred years ago than they do today. Today, the terms describe a specific constellation of symptoms, one of which is the meaningful and significant interruption the disorder makes upon a person’s ordinary, daily life.
Jung’s life, was by all accounts, not interrupted by his unconscious thoughts. He continued experiencing them off and on for 16 years, all the while traveling, speaking at various professional meetings, and translating and publishing his writings in English.
Jung did suffer from isolation, but that was likely caused more by his break from Sigmund Freud in 1915. World War I also negatively impacted virtually everybody’s life at this time, including Jung’s.
Also, Jung reportedly found a way to bring on his unconscious stream of thoughts and visions at will — something most people today who experience psychosis or schizophrenia can’t do. Nor can they do the opposite — make them go away by just willing it. If mental disorders could simply be fixed by willpower, we’d probably have little need for therapists or psychiatrists today.
* * *
It’s extraordinary to imagine one of the founders of modern psychological theories experienced such visions, and used them in his own way to form a creative work such as The Red Book.