Some thoughts on Heathrow...... mutterings and ponderings 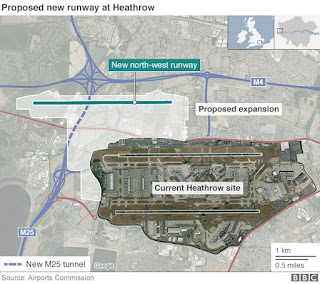 There are no two ways about it; this is a disastrous decision for the people of Britain, and the planet. Welcome to Theresa May's never-never land, where prime ministers never have to listen to scientists and never have to apologise for increasing CO2 emissions and air pollution levels. The Maidenhead MP has flip-flopped on her previous opposition to Heathrow and has kowtowed to the demands of multi-million-pound airport lobbies while ignoring the concerns of her own constituents and the need to take urgent action to mitigate catastrophic climate change. Is this what the Prime Minister had in mind when she promised to build a Britain not driven by the interests of a privileged few?

Britain's 'airport capacity crisis' is, and always has been, a dangerous myth driven by corporate greed, not by actual need. Not only is all but one airport in the UK operating under capacity, sponsoring the exponential growth of an aviation industry that is a top-ten global polluter is wholly incompatible with the Prime Minister's promise to ratify the Paris Agreement. This Conservative government, led by a Prime Minister with no mandate, continues to make decisions so manifestly against the interests of the UK and the British people. From Hinkley to Heathrow this administration is on course to be the most ruinous the country has ever seen.
Contrary to all the evidence Theresa May has decided to forge ahead with the expansion of Heathrow airport regardless of the dreadful impact this will have on the local community, London and indeed the planet.

This decision is clearly incompatible with Britain's recent agreement to ratify the Paris Agreement and will further contribute to air pollution for my constituents in London and beyond. Following the disastrous decisions on Hinkley and in Lancashire, a very worrying pattern is emerging with regards to this government's commitment, or rather lack of commitment to the environment, the health of its citizens and common sense.

Supporters of Heathrow expansion claim a third runway could be completed without air quality legal limits being breached. However, opponents reject suggestions that anticipated future reductions in air pollution from cleaner vehicles could allow an expanded Heathrow airport to emit more pollution than at present and stay within legal limits.