ARISTOTLE & THE ELEMENTS OF TRAGEDY: 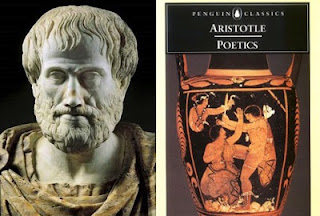 Definition: Tragedy depicts the downfall of a noble hero or heroine, usually through some combination of hubris, fate, and the will of the gods. The tragic hero's powerful wish to achieve some goal inevitably encounters limits, usually those of human frailty (flaws in reason, hubris, society), the gods (through oracles, prophets, fate), or nature. Aristotle says that the tragic hero should have a flaw and/or make some mistake (hamartia). The hero need not die at the end, but he/she must undergo a change in fortune. In addition, the tragic hero may achieve some revelation or recognition (anagnorisis--"knowing again" or "knowing back" or "knowing throughout" ) about human fate, destiny, and the will of the gods. Aristotle quite nicely terms this sort of recognition "a change from ignorance to awareness of a bond of love or hate."
I. Definition of Tragedy
(From the Poetics of Aristotle [384-322 BC])
"Tragedy, then, is a process of imitating an action which has serious implications, is complete, and possesses magnitude; by means of language which has been made sensuously attractive, with each of its varieties found separately in the parts; enacted by the persons themselves and not presented through narrative; through a course of pity and fear completing the purification (catharsis[*], sometimes translated "purgation") of such emotions."
a) "imitation" (mimesis)[*]: Contrary to Plato, Aristotle asserts that the artist does not just copy the shifting appearances of the world, but rather imitates or represents Reality itself, and gives form and meaning to that Reality. In so doing, the artist gives shape to the universal, not the accidental. Poetry, Aristotle says, is "a more philosophical and serious business than history; for poetry speaks more of universals, history of particulars."
b) "an action with serious implications": serious in the sense that it best raises and purifies pity and fear; serious in a moral, psychological, and social sense.
c) "complete and possesses magnitude": not just a series of episodes, but a whole with a beginning, a middle, and an end. The idea of imitation is important here; the artist does not just slavishly copy everything related to an action, but selects (represents) only those aspects which give form to universal truths.
d) "language sensuously attractive...in the parts": language must be appropriate for each part of the play: choruses are in a different meter and rhythm and more melodious than spoken parts.
e) tragedy (as opposed to epic) relies on an enactment (dramatic performance), not on "narrative" (the author telling a story).
f) "purification" (catharsis): tragedy first raises (it does not create) the emotions of pity and fear, then purifies or purges them. Whether Aristotle means to say that this purification takes place only within the action of the play, or whether he thinks that the audience also undergoes a cathartic experience, is still hotly debated. One scholar, Gerald Else, says that tragedy purifies "whatever is 'filthy' or 'polluted' in the pathos, the tragic act" (98). Others say that the play arouses emotions of pity and fear in the spectator and then purifies them (reduces them to beneficent order and proportion) or purges them (expels them from his/her emotional system).
II. The Tragic Hero
The tragic hero is "a [great] man who is neither a paragon of virtue and justice nor undergoes the change to misfortune through any real badness or wickedness but because of some mistake."
a) a great man: "one of those who stand in great repute and prosperity, like Oedipus and Thyestes: conspicuous men from families of that kind." The hero is neither a villain nor a model of perfection but is basically good and decent.
b) "mistake" (hamartia): This Greek word, which Aristotle uses only once in the Poetics, has also been translated as "flaw" or as "error." The great man falls through--though not entirely because of--some weakness of character, some moral blindness, or error. We should note that the gods also are in some sense responsible for the hero's fall.
III. Plot
Aristotle distinguished six elements of tragedy: "plot, characters, verbal expression, thought, visual adornment, and song-composition." Of these, PLOT is the most important. The best tragic plot is single and complex, rather than double ("with opposite endings for good and bad"--a characteristic of comedy in which the good are rewarded and the wicked punished). All plots have some pathos (suffering), but a complex plot includes reversal and recognition.
a) "reversal" (peripeteia): occurs when a situation seems to developing in one direction, then suddenly "reverses" to another. For example, when Oedipus first hears of the death of Polybus (his supposed father), the news at first seems good, but then is revealed to be disastrous.
b) "recognition" (anagnorisis or "knowing again" or "knowing back" or "knowing throughout" ): a change from ignorance to awareness of a bond of love or hate. For example, Oedipus kills his father in ignorance and then learns of his true relationship to the King of Thebes.
Recognition scenes in tragedy are of some horrible event or secret, while those in comedy usually reunite long-lost relatives or friends. A plot with tragic reversals and recognitions best arouses pity and fear.
c) "suffering" (pathos): Also translated as "a calamity," the third element of plot is "a destructive or painful act." The English words "sympathy," "empathy," and "apathy" (literally, absence of suffering) all stem from this Greek word.
Works Cited
Aristotle. Poetics. Trans. Gerald F. Else. Ann Arbor: U of Michigan P, 1967. Dorsch, T. R., trans. and ed. Aristotle Horace Longinus: Classical Literary Criticism. New York: Penguin, 1965. Ley, Graham. The Ancient Greek Theater. Chicago: U of Chicago P, 1991. Reinhold, Meyer. Classical Drama, Greek and Roman. New York: Barrons, 1959.
Posted by Any Human Heart at 11:07