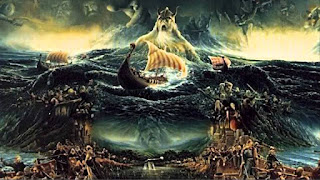 What is Norse mythology

Before the Norse (a.k.a. the Vikings) and other Germanic peoples were converted to Christianity during the Middle Ages, they had their own highly sophisticated and complex indigenous religion. Norse mythology is the set of religious stories the Vikings told to one another. These myths revolved around deities with fascinating and highly complex characters, such as Odin, Thor, Freya, and Loki.
The religion of the Norse and other Germanic peoples never had a true name – those who practiced it just called it “tradition.” However, people who continued to follow the old ways after the arrival of Christianity were sometimes called “heathens,” which originally meant simply “people who live on the heaths” or elsewhere in the countryside, and the name has stuck. Throughout this site, I refer to it as “the heathen Germanic religion,” “the pre-Christian Germanic religion,” or something to that effect.

Norse mythology was for the heathen Germanic peoples what the stories in the Bible are to Christians and what the doctrines of evolution and historical progress are to modern science and secular society: grand narratives that give life meaning and that help people to make sense of the world.

Ultimately, Norse mythology presents a worldview that is very, very different from the worldview of modern science or that of most modern “world religions.” The pre-Christian Germanic religion was animistic, polytheistic, pantheistic, and held a cyclical view of time. This course lasts for eight 2 hour sessions and costs £50 more details from 07592330467 or squabs@hotmail.co.uk
Posted by Any Human Heart at 15:23