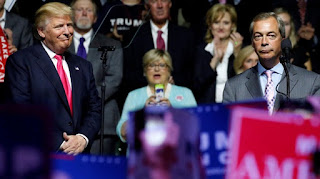 Nigel Farage speaking at a Trump rally. Credit: Reuters
Interim Ukip leader Nigel Farage has insisted that Donald Trump's obscene remarks about sexually assaulting women amounted to "alpha male boasting".
Speaking in St Louis, Missouri, where he is attending this week's televised debate as a Trump supporter, Mr Farage said the comments were "ugly", but said women also say things they would not want reported.
"Look, this is alpha male boasting. It's the kind of thing, if we are being honest, that men do. They sit around and have a drink and they talk like this.
"By the way, quite a lot of women say things amongst themselves that they would not want to see on Fox News, or the front page of a newspaper. I'm not pretending it's good - it's ugly, it is ugly."
His comments echo the initial response of Mr Trump who dismissed the comments caught on video tape as "locker room banter" before the scale of the crisis forced him to issue an apology.
Trump and Farage on stage together at a rally.
Trump and Farage on stage together at a rally. Credit: Reuters
On the tape, Mr Trump, who had just married his third wife Melania, talks about coming on to a married woman, saying: I moved on her and I failed, I'll admit it ... I did try and f*** her. I moved on her like a b***h, but I couldn't get there. And she was married."
He then talks about sexually assaulting women, saying: "I am automatically attracted to beautiful women. I just start kissing them. It's like a magnet. Just kiss, I don't even wait ... and when you're a star, they let you do it. You can do anything."
"Grab them by the p***y. You can do anything."
Mr Farage has spoken at a Trump rally previously, and was reported to be helping the Republican candidate prepare for the second debate after losing the first to Hillary Clinton by a clear margin.
Posted by Any Human Heart at 17:21