I am the Old Pagan at Old Halloween

I am the Old Pagan at Old Halloween/ When the Gregorian calender was abolished in the 18th century. We skipped ahead eleven days and November 11 was for many years called old Halloween. The bloodiest of wars World War one ended on Halloween. Leonard Cohen slipped away from us on Friday. The name Cohen comes from the name of the priests of the ancient Hebrews. This Monday we have a super Moon. It will be the largest full Moon for over sixty years,

The fifteenth of the Hebrew month is the full moon. The Psalms use the word keseh to describe a festive time, and some commentators believe this word refers to the full moon.Keseh is like kos, cup, and the full moon is like a brimming cup of abundance. 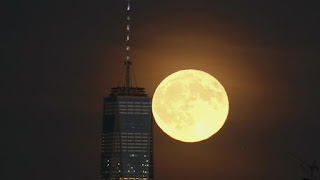 Many festivals of freedom and abundance, such as Sukkot, Tu B'Shevat, Purim, and Passover, fall on the full moon. Within the Hrebrew tradition this a celebration of the feminise. It is a relic of the old Goddesses and still it exists. Ecology, feminism, socialism and challenge to the authoritarian are its areas. I see the nascent seed of resistance growing across the USA and across Europe, just as I see the rise of the authoritarian populists of the Right. Michael Moore , Bernie Sanders are working in the states, the Greens , the Corbynistas here, across Europe Podemos and other groups grow in strength

Last time the Moon was like this it 3 years after the end of the battle against fascism. We were establishing the Welfare state, progressive politics was in ascendency. This week we lose Leonard Cohen and Donald Trump is elected to the Presidency of the USA and the first politician from the UK to visit him is the crown prince is the facile Nigel Farage. What a falling off there has been. The Andrew Marr show then invites Marine le Pen for an interview. Lepen`s father was an apologist for Vichy, the pseudo Fascist regime installed by the Nazis...what greater insult can there be to the veterans who fought Fascism. And what were the words that stick in mind? The words of Marine Le-pen “ Theres not a ha-pence of difference between the Front Nationale and UkIP Perhaps UKIP pretends it is not so for political reasons” I did tell you so and I smell Weimar smoke drifting from the USA , across the UK and beginning to settle over France.
In 2034 at the next super-moon. I will be 76 . let us build a progressive future out of the shocks of the last six months. I will be there looking back to now and celebrating that Farage and Trump will be long gone. Their politics and philosophy did credited, the world more tolerant and inclusive.

Here are the names traditionally associated with the full Moons of the Months of the year .
Many human cultures have given names to the full moon throughout the year. Different full moon names can be found among the Chinese, Celtic, Old English, and New Guinea cultures, to name a few. In addition, Native American tribes often used moon phases and cycles to keep track of the seasons and gave a unique name to each recurring full moon. The full moon names were used to identify the entire month during which each occurred.
Although many Native American Tribes gave distinct names to the full moon, the most well known names of the full moon come from the Algonquin tribes who lived in the area of New England and westward to Lake Superior. The Algonquin tribes had perhaps the greatest effect on the early European settlers in America, and the settlers adopted the Native American habit of naming the moons. They even invented some of their own names that have been passed down through time.
The names given below aren't the only ones that have been used. Every full moon, with one exception, had variations on its name among various Algonquin tribes, not to mention other tribes throughout North America. But the names below are the most common. Some of the variations are also mentioned.

January: The Wolf MoonIn January snow gathers deep in the woods and the howling of wolves can be heard echoing in the cold still air. Some tribes called this moon the Snow Moon, but most often it was used for the next month.

February: The Snow MoonSnow piles even higher in February, giving this moon its most common name. Among tribes that used this name for the January moon, the February moon was called the Hunger Moon due to the challenging hunting conditions.

March: The Worm MoonSnow slowly begins to melt, the ground softens, and earthworms show their heads again and their castings or fecal matter can be found. Other signs of spring gave rise to other variations: the cawing of crows (the Crow Moon); the formation of crusts on the snow from repeated thawing and freezing (the Crust Moon); and the time for tapping maple trees (the Sap Moon). Christian settlers also called this the Lenten Moon and considered it the last moon of winter.

May: The Flower MoonFlowers come into full bloom and corn is ready to plant. Also called the Corn Planting Moon and the Milk Moon.

June: The Strawberry MoonStrawberry-picking season reaches its peak during this time. This is one of the few names that was universal to all Algonquin tribes.

August: The Sturgeon MoonThe sturgeon, a large fish common to the Great Lakes and other nearby bodies of water, is most easily caught during this month. The reddish appearance of the moon through the frequent sultry hazes of August also prompted a few tribes to dub it the Red Moon. Other names included the Green Corn Moon and the Grain Moon.

September: The Harvest MoonMany of the Native American tribes' staple foods, such as corn, pumpkins, squash, beans, and rice, are ready for gathering at this time. The strong light of the Harvest Moon allowed European farmers to work late into the night to harvest their crops. The Harvest Moon does not always occur in September. Traditionally, the name goes to the full moon closest to the autumn equinox, which falls during October once or twice a decade. Sometimes the September full moon was called the Corn Moon.

October: The Hunter's MoonAfter the fields have been reaped, the leaves begin to fall and the deer are fat and ready for eating. Hunters can ride easily over the fields' stubble, and the fox and other animals are more easily spotted. Some years the Harvest Moon falls in October instead of September.

November: The Beaver MoonAt this time of year the beavers are busy preparing for winter, and it's time to set beaver traps and secure a store of warm fur before the swamps freeze over. Some tribes called this the Frosty Moon.

December: The Cold MoonWinter takes a firm hold and temperatures plummet at this time. Sometimes this moon is also called the Long Night Moon as the winter nights lengthen and the moon spends more time above the horizon opposite a low sun. The full moon name often used by Christian settlers is the "Moon before Yule".

Blue MoonNote that due to the 29-day lunar cycle the exact dates of the full moon move every year. Most seasons have three full moons, but because of the variation some seasons have four full moons. The term "blue moon" was used to identify one of these extra full moons. A mistaken definition in the March 1946 edition of Sky and Telescope magazine claimed the blue moon fell on the second full moon of the calendar month. This mistake caused widespread misunderstanding until it was finally corrected in 1999. November 11 was for many years called old halloween.
Posted by Any Human Heart at 17:42