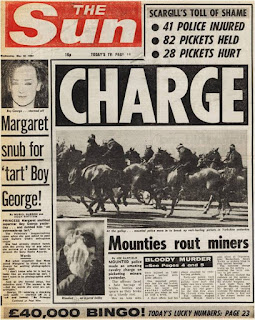 It was a brutal police operation that defined the Thatcher years. How did it come about that the miners in flimsy t shirts were settled there./ How did it come about that so many police were concentrated in one spot/ The police had dogs and horses. Margaret Thatcher herself felt that the magistrates were going easy on the miners and she brought the weight of the state and its power to bear down upon that day.......The Tories had planned for a long time for revenge....this was their chance........

On that day in 1984, 8,000 miners who went to picket lorry drivers supplying coke to the steel industry were met by 6,000 police officers drawn from all over the country, commanded by South Yorkshire police. The force included 42 officers on horseback and the first units with short shields and truncheons ever used in Britain. Their official purpose, stated in the police’s tactical manual, was to “incapacitate” demonstrators. 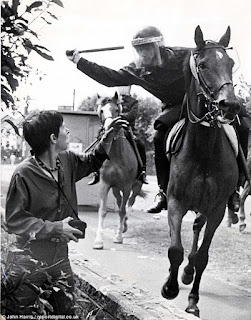 The news footage beamed into the nation’s homes that night is itself central to the continuing dispute. The BBC showed miners throwing stones and other missiles at the police, followed by mounted officers charging into them, and then officers chasing miners, some clearly being hit over the head with truncheons.

The miners always said the police had brutally attacked them without justifiable provocation, and that the attack felt preplanned. They complained that the BBC had reversed footage, to show miners who threw missiles seemingly before the police charge rather than in retaliation for it. That night the prime minister, Margaret Thatcher, who was determined to defeat the strike, and with it the power of the National Union of Mineworkers, made it clear she believed in the police. This was, she famously said, “mob rule” by the miners.

Far less publicised, a year later, was the unravelling of the police case. Officers had arrested and charged 95 miners with riot, an offence of collective violence carrying a potential life sentence. Yet in July 1985 the prosecution withdrew and all the miners were were acquitted after the evidence of some police officers, including those in command, had been discredited under cross-examination.

In 1991 South Yorkshire police paid £425,000 compensation to 39 miners who had sued the force for assault, unlawful arrest and malicious prosecution. But still the police did not admit any fault, and not a single police officer was ever disciplined or prosecuted. 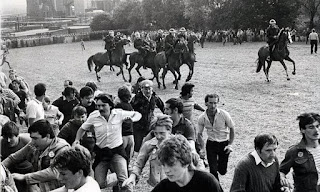 In 2012, after reporting by the Guardian and a BBC documentary that showed that dozens of police officers’ statements had identical opening paragraphs setting out the scene of a riot, South Yorkshire police referred themselves to the Independent Police Complaints Commission for possible misconduct.
The IPCC took two and a half years to read the available paperwork – which did not include any documents relating to the planning of the operation, as South Yorkshire police said they had not found any. Owing to the passage of time, the IPCC decided it would not mount a formal investigation. But in its report, finally published last month, the IPCC found “support for the allegation” that three senior police officers in command at Orgreave had “made up an untrue account exaggerating the degree of violence (in particular missile throwing)” from miners to justify their use of force and the charges of riot. The report said one of these most senior officers had his statement typed and witnessed by another officer who led a team of detectives which, the IPCC said, dictated those identical opening paragraphs of junior officers’ statements.The report says the BBC had indeed reversed footage in its news broadcast that night, an accusation the BBC has never officially accepted.
Explosively, the IPCC revealed for the first time that South Yorkshire police, when contemplating the civil claims, recognised there had been some excessive violence by officers and perjury in the trial that followed, but covered it up. The force settled the claims, the IPCC stated, “very much prompted” by senior officers’ knowledge of this misconduct.

Three decades on, former miners and their supporters in the Orgreave Truth and Justice Campaign believe they have been vindicated, but feel frustrated by the IPCC’s decision not to formally investigate. The call for a public inquiry, or a Hillsborough-style disclosure of all police documents to an independent panel, is backed by dozens of Labour MPs, including party the leadership frontrunners Andy Burnham and Yvette Cooper.
May faces a difficult decision, of course, in confronting the established police narrative, which many in her own party still believe. But the campaign has already found her more receptive than might have been assumed of a Conservative home secretary. In her support for several new inquiries, the new Hillsborough inquests and criminal investigations, and a starkly challenging speech last year to the Police Federation, May has consistently been intolerant of police malpractice.


And there are wider reasons to set up a public inquiry or an independent panel to review the evidence. Police in many mining communities remain widely and deeply distrusted, which the acknowledgement of lingering injustice could help to reconcile, locally and nationally. More broadly, Orgreave was a landmark event in British history, pivotal not only to the ultimate defeat of the miners’ strike, but to the closure of the mines and other major industries that followed, and it is important the nation knows the truth.


We have had Hillsborough revealed ..The next generation of the hard right are using Brexit to argue for a continuation of the Thatcher revolution and they are seeking to hide the truth of the Battle of Orgreave...it must not happen there must be a full public inquiry.
Posted by Any Human Heart at 12:36