Watching the Narcissists both known and unknown 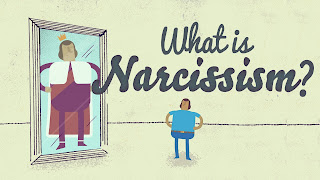 have been a Therapist for over 25 years. I have seen manipulation done on others, experienced attempts by others to manipulate me and have helped others who manipulate others to change and over come it. This has also helped me spot element within myself and within my every day life. Its helped me deveop sixth senses, intuitive leaps but now I must decide what to do. It would be easy to fade back into private life to get on with teaching and enjoy every day life. So I have to point out the following and leave the observations up to you

The abusive narcissist works in five key ways. In popular culture, the term “narcissistic” is thrown about quite loosely, usually referring to vanity and self-absorption. This reduces narcissism to a common quality that everyone possesses and downplays the symptoms demonstrated by people with the actual disorder. While narcissism does exist on a spectrum, narcissism as a full-fledged personality disorder is quite different.

It’s important in any kind of relationship or friendship that we learn to identify the red flags when interacting with people who display malignant narcissism and/or antisocial traits, so we can better protect ourselves from exploitation and abuse, set boundaries, and make informed decisions about who we keep in our lives. Understanding the nature of these toxic interactions and how they affect us has an enormous impact on our ability to engage in self-care.

1. The Idealization-Devaluation-Discard Phase
Narcissists and those with antisocial traits tend to subject colleagues through three phases within a relationship or friendship . The idealization phase (which often happens most strongly during the early stages of meeting consists of putting you on a pedestal, making you an important of his/her world, being in contact with you frequently, and showering you with flattery and praise. Be wary of: constant texting, shallow flattery and wanting to be around you at all times. This is a technique known as “love bombing” and it is how most victims get sucked in: they are tired of the “games” people play with each other in communication and are flattered by the constant attention they get from the narcissist. You may be fooled into thinking that this means a narcissist is truly interested in you, when in fact, he or she is interested in making you dependent on their constant praise and attention.
The devaluation phase is subsequent to this idealization phase, and this is when you’re left wondering why you were so abruptly thrust off the pedestal. The narcissist will suddenly start to blow hot and cold, criticizing you, covertly and overtly putting you down, comparing you to others, emotionally withdrawing from you and giving you the silent treatment when you’ve failed to meet their “standardsEven though the narcissist can be quite possessive and jealous over friend, their own worth , since he or she views you as an object and a source of narcissistic supply, the narcissist is prone to projecting this same behaviour onto you.
Unfortunately, it is during the devaluation phase that a narcissist’s true self shows itself. You have to understand that the man or woman in the beginning of the relationship never truly existed. The true colours are only now beginning to show, so it will be a struggle as you attempt to reconcile the image that the narcissist presented to you with his or her current behaviour.During the discard phase, the narcissist devalues his or her opponent in the most demeaning way possible to convince the opponent that he or she is worthless.

2. Gas lighting.
Most abusive relationships contain a certain amount of gaslighting, a technique narcissists use to convince you that your perception of the abuse is inaccurate. During the devaluation and discard phases, the narcissist will often remark upon your emotional instability, your “issues,” and displace blame of his/her abuse as your fault. Frequent use of phrases such as “You provoked me,” “You’re too sensitive,” “I never said that,” or “You’re taking things too seriously” after the narcissists’ abusive outbursts are common and are used to gaslight you into thinking that the abuse is indeed your fault or that it never even took place.
Narcissists are masters of making you doubt yourself and the abuse. This is why victims so often suffer from ruminations , because the emotional invalidation they received from the narcissist made them feel powerless in their agency and perceptions. This self-doubt enables them to stay within abusive relationships even when it’s clear that the relationship is a toxic one, because they are led to mistrust their own instincts and interpretations of events.

3. Smear campaigns.
Narcissists keep followers because they love to have their egos stroked and they need constant validation from the outside world to feed their need for excessive admiration and confirm their grandiose sense of self-importance. They are clever chameleons who are also people-pleaser, morphing into whatever personality suits them in situations with different types of people. It is no surprise, then, that the narcissist begins a smear campaign against you not too long after the discard phase, in order to paint you as the unstable one, and that this is usually successful with the narcissist’s support network which also tends to consist of other narcissists, people-pleaser, empaths, as well as people who are easily charmed.
This smear campaign accomplishes three things: 1) it depicts you as the abuser or unstable person and deflects your accusations of abuse, 2) it provokes you, thus proving your instability to others when trying to argue his or her depiction of you, and 3) serves as a hoovering technique in which the narcissist seeks to pull you back into the trauma of the relationship as you struggle to reconcile the rumours about you with who you actually are by speaking out against the accusations. The only way to not get pulled into this tactic is by going full No Contact with both the narcissist and his or her followers

4. Triangulation.
Healthy relationships thrive on security; unhealthy ones are filled with provocation, uncertainty and misrepresentation Narcissists like to manufacture triangles and bring in the opinions of others to validate their point of view. They do this to an excessive extent in order to play puppeteer to your emotions. I. Triangulation consists of bringing the presence of another person into the dynamic of the relationship, whether it be an ex-lover, a current mistress, a relative, or a complete stranger.This triangulation can take place over social media, in person, or even through the narcissist’s own verbal accounts of the other person. Unlike healthy relationships where feelings are communicated and dealt with in a productive manner, the narcissist will belittle your feelings and continue inappropriate accusations of bullying without a second thought. Triangulation is the way the narcissist maintains control and keeps you in check

5. The false self and the true self.
The narcissist hides behind the armour of a “false self,” a construct of qualities and traits that he or she usually presents to the outside world. Due to this armour, you are unlikely to comprehend the full extent of a narcissist’s inhumanity and lack of empathy until you are in the discard phase. This can make it difficult to pinpoint who the narcissistic abuser truly is – the sweet, charming and seemingly remorseful person that appears shortly after the abuse, or the abusive partner who ridicules, invalidates and belittles you to others on a daily basis? You suffer a great deal of cognitive dissonance trying to reconcile the illusion the narcissist first presented to you with the tormenting behaviours he or she subjects you to. In order to cope with this cognitive dissonance, you might blame yourself or others for his or her abusive behaviour and attempt to “improve” yourself when you have done nothing wrong, just to uphold your belief in the narcissist’s false self during the devaluation phase.

During the discard phase, the narcissist reveals the true self – the genuinely abusive and abrasive personality beneath the shallow veneer rears its ugly head and you get a glimpse of the cruelty that was lurking within all along. You bear witness to his or her cold, callous indifference as you are discarded. You might think this is only a momentary lapse into inhumanity, but actually, it is as close you will ever get to seeing the narcissist’s true self.
The manipulative, conniving charm that existed in the beginning is no more – instead, it is replaced by the genuine contempt that the narcissist felt for you all along. See, narcissists don’t truly feel empathy or love for others – so during the discard phase, they feel absolutely nothing for you except the excitement of having exhausted another source of supply. You were just another source of supply, so do not fool yourself into thinking that the magical connection that existed in the beginning was in any way real. It was an illusion, much like the identity of the narcissist was an illusion.