Some Camus for a Monday Morning

“Some people talk in their sleep. Lecturers talk while other people sleep”
― Albert Camus
“I would like to be able to breathe— to be able to love her by memory or fidelity. But my heart aches. I love you continuously, intensely.”
― Albert Camus, Notebooks 1951-1959
“Mother used to say that however miserable one is, there’s always something to be thankful for. And each morning, when the sky brightened and light began to flood my cell, I agreed with her.”
― Albert Camus, The Stranger
“The only serious question in life is whether to kill yourself or not.”
― Albert Camus
“It is not your paintings I like, it is your painting.”
― Albert Camus
“I knew a man who gave twenty years of his life to a scatterbrained woman, sacrificing everything to her, his friendships, his work, the very respectability of his life and who one evening recognized that he had never loved her. He had been bored, thats all, bored like most people. Hence he had made himself out of whole cloth a life full of complications and drama. Something must happen and that explains most human commitments. Something must happen even loveless slavery, even war or death.”
“It was previously a question of finding out whether or not life had to have a meaning to be lived. It now becomes clear on the contrary that it will be lived all the better if it has no meaning”
“We don't have the time to completely be ourselves. We only have the room to be happy.”
“To create is to live twice.”
“The loves we share with a city are often secret loves.”
― Albert Camus, Summer in Algiers
“How unbearable, for women, is the tenderness which a man can give them without love. For men, how bittersweet this is.”
― Albert Camus, Notebooks 1935-1942
“I've been thinking it over for years. While we
loved each other we didn't need words to make ourselves understood. But people don't love forever. A time came when I should have found the words to keep her with me, only
I couldn't." - Grant”
― Albert Camus, The Plague
“It is a matter of living in that state of the absurd I know on what it is founded, this mind and this world straining against each other without being able to embrace each other. I ask for the rule— of life of that state, and what I am offered neglects its basis,
negates one of the terms of the painful opposition, demands of me a resignation. I ask what is involved in the condition I recognize as mine; I know it implies obscurity and ignorance; and I am assured that this ignorance explains everything and that this darkness is my
light.”
― Albert Camus, The Myth of Sisyphus and Other Essays
“Against eternal injustice, man must assert justice, and to protest against the universe of grief, he must create happiness.”
― Albert Camus
“It is not humiliating to be unhappy. Physical suffering is sometimes humiliating, but the suffering of being cannot be, it is life.”
― Albert Camus, Notebooks, 1935-1951
“For years I’ve wanted to live according to everyone else’s morals. I’ve forced myself to live like everyone else, to look like everyone else. I said what was necessary to join together, even when I felt separate. And after all of this, catastrophe came. Now I wander amid the debris, I am lawless, torn to pieces, alone and accepting to be so, resigned to my singularity and to my infirmities. And I must rebuild a truth–after having lived all my life in a sort of lie.”
― Albert Camus, Notebooks 1951-1959
“In the age of ideologies, we must make up our minds about murder. If murder has rational foundations, then our period and we ourselves have significance. If it has no such foundations, then we are plunged into madness there is no way out except to find some significance or to desist.”
― Albert Camus, The Fastidious Assassins
“You are only excused for happiness and success if you generously agree to share them. But if one is to be happy, one should not worry too much about other people - which means there is no way out.
Happy and judged or absolved and miserable.”
― Albert Camus
“C'est cela l'amour, tout donner, tout sacrifier sans espoir de retour.”
― Albert Camus, Les Justes
―
“In the early days, when they thought this epidemic was much like other epidemics, religion held its ground. But once these people realized their instant peril, they gave their thoughts to pleasure. And all the hideous fears that stamp their faces in the daytime are transformed in the fiery, dusty nightfall into a sort of hectic exaltation, an unkempt freedom fevering in their blood.”
― Albert Camus
“I noticed that he laid stress on my “intelligence.” It puzzled me rather why what would count as a good point in an ordinary person should be used against an accused man as an overwhelming proof of his guilt.”
― Albert Camus
“The misery and greatness of this world: it offers no truths, but only objects for love. Absurdity is king, but love saves us from it.”
― Albert Camus, Notebooks 1935-1942
“I was at ease in everything, to be sure, but at the same time satisfied with nothing. Each joy made me desire another. I went from festivity to festivity. On occasion I danced for nights on end, ever madder about people and life. At times, late on those nights when the dancing, the slight intoxication, my wild enthusiasm, everyone’s violent unrestraint would fill me with a tired and overwhelmed rapture, it would seem to me—at the breaking point of fatigue and for a second’s flash—that at last I understood the secret; I would rush forth anew. I ran on like that, always heaped with favors, never satiated, without knowing where to stop, until the day -- until the evening rather when the music stopped and the lights went out.”
― The Fall 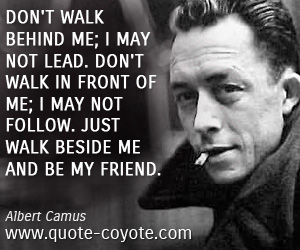