What Is the Meaning of Cultural Imperialism?

What Is the Meaning of Cultural Imperialism? 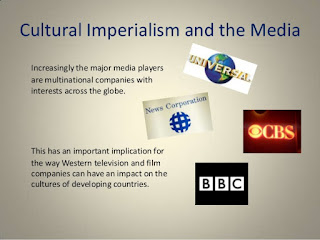 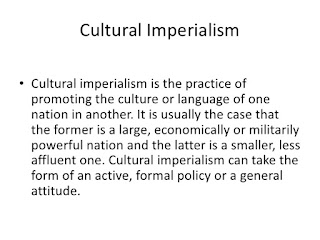 According to the theory of cultural imperialism, less economically prominent cultures essentially import culture from wealthier countries -- chiefly Western countries, which have the economic means necessary to produce a majority of the world's cultural media -- mostly via the global transmission of media. As one society exerts cultural influence over another, the latter society adopts its customs, philosophies, worldviews and general ways of life. Under the imposition of another culture, the “lesser” culture is thought to lose some of its own cultural identity in the process.

Since Herbert Schiller's book “Communication and Cultural Domination” first coined the phrase in 1976, the concept of cultural imperialism is often used to refer to the idea of America exerting cultural influence over the rest of the world, with a particularly powerful imposition on Third World countries. Examples of American cultural imperialism include brand name products, mass-produced food and, perhaps of primary importance, video media. While this may come with some positive effects -- showing women's rights or racial equality in a positive light, for example -- it also tends to paint America as a leader or hero, potentially exerting a negative effect on the viewer's perception of his own country or other non-American cultures.

Although cultural imperialism may also extend to the development of governmental and economic systems, it largely focuses on the assimilation of media, including literature, film, television, music and Internet content, among other forms. This concept, known as media imperialism, refers to a situation in which a culture is chiefly exposed to the media interests of another society rather than their own. This occurs without reciprocation -- the affected country or culture's media is not exported in turn to the influencing country in any significant fashion, making media and cultural imperialism a strictly one-way street.

Despite the prevalence of the term, the idea of cultural imperialism is not without its detractors. Some point out that the concept assumes that human beings lack free will, painting them as mindlessly assimilating what they absorb through media without retaining their own personal frame of reference. Other critics note that while economic aspects of cultural imperialism can be concretely measured, the cultural component is subjective and difficult or impossible to quantify.