"I believe that the ecological crisis will bring about the end of capitalism." Rudolf Bahro 1935- to 1977 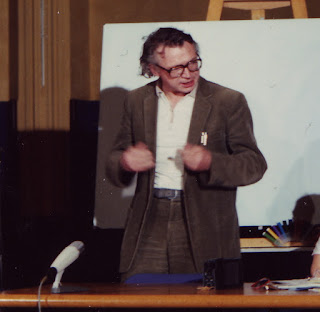 "I have always believed in the power of the idea and the word, and that it matters whether one is convinced of oneself and one's cause and doesn't shrink back deep down inside when the decision has to be made."

"The earth can belong to no one."

"I believe that the ecological crisis will bring about the end of capitalism."

Some 20 years ago I was given a copy of a Rudolf Bahro book . It was instrumental in my joining of the Green Party and of a personal synthesis of Libertarian Socialism and Ecological Politics. I have been thinking about the importance of Bahro's work for radical ecology and of his contribution to the green movement,

Personally, his thinking and the evolution of his jarring ideas inspired and influenced me, and gave me strength. He explored with a ruthless honesty the real contradictions for a left wing activist of becoming a green. For Bahro, the working class along with the bourgeoisie are intrinsic parts of the industrial system: "In the case of capitalism the workers are part of the carousel of the capitalist formation." Consumerism and traditional Left parties belong to the most conservative societal forces and are opposed to the transformation of society.

Bahro's writings gave me the courage to say things which I believed and needed to be said, but which I knew would not be well received. Bahro was against that reformism which passes itself off as oppositional activity, but which prolongs the illusory life of industrial society. Bahro, a founding member of the West German 'Die Grunen', in 1980 was elected to the Federal Executive. For him, green politics was about capturing people's consciousness, not accumulating votes. By 1985 he had resigned from the Party. His resignation statement noted how the Greens did not want to get out of the industrial system: "Instead of spreading consciousness they are obscuring it all along the line." Bahro particularly repudiated the continuing justification of animal experimentation by the West German Green party.
For Bahro, industrialised nations needed to reduce their impact upon the Earth to one tenth of what it was. "Development" was finished. Like the Norwegian deep ecology philosopher Arne Nameless, Bahro had a biocentric, not hunter-gatherer world view. Unlike Nameless, Bahro was steeped in the culture of the left.
Bahro came to critical awareness in the former German Democratic Republic, East Germany. There, a Communist party Marxism was the taken-for-granted official view. Bahro himself joined the Party in 1952 at age 17. After the 1968 invasion of Czechoslovakia, he withdrew his identification from the official regime. He was imprisoned for writing his first major work, The Alternative In Eastern Europe, published in then West Germany. The Alternative
The Alternatives divided this process into three parts:

The introduction begins with the premise that the Communist movement did not lead to the theoretically expected situation, but instead continued on the capitalist path with only superficial changes. "Alienation and the subaltern mentality of the working masses continue on a new level." The book analyses the reasons for this, and offers solutions.

The first part is a historical analysis of the development of socialism in the Soviet Union. Bahro concludes that in the Soviet Union (and, consequently, also in countries such as East Germany ) not the theoretically expected socialism but a form of proto-socialism had emerged. For the reason, he posits that at the time of the November Revolution the Soviet Union was far from the stage of development presumed in Marx's theory of history.
I
n the second part Bahro examines the existing social system, which he believes was incorrectly called "real socialism" when in reality it was still a class society. He detailed how this society worked, and argues that this provided the rationale for the observed economic stagnation.

In the third part he developed solutions, including a call for a new revolution which would transform not only the social circumstances but the people. Its intention is to overcome the subaltern mentality, the "form of existence and way of thinking of ordinary people." He demanded the abolition of the division of labour; all should participate in science, art and menial work. He was deported in 1979 from the GDR after serving two years in jail.

Bahro moved intellectually from a critical Communism/Marxism, to E co-Socialism, to Die Greene party spokesperson, and finally to a Green movement fundamentalism and concern for personal spiritual transformation. On this path he demolished left, green party and bourgeois orthodoxies. He made many of  his supporters uneasy as he explored the links between environmental politics and spiritual transformation.

Humans, he believed, need to look inward in order to find the strength to break with the death course of industrial society. Bahro sought to establish communal liberated zones within industrialized society which would provide "institutional security for the experience of the self."

He was also deliberately misunderstood and slandered. Radical dissenters are never loved. There is no slot to place him in. It was said of Bahro that he was still sitting in the area between the East and the West. Bahro said he was in agreement "with the essential points" of the philosophy of left biocentrism.

The following books are available in English:
The Alternative In Eastern Europe, 1977. Bahro called this book "A Contribution to the Critique   of Actually Existing Socialism" from a revolutionary standpoint.
Socialism and Survival, 1982

From Red To Green, 1984. Particularly recommended.
Building The Green Movement, 1986
Avoiding Social & Ecological Disaster: The Politics of World Transformation.
Posted by Any Human Heart at 12:10