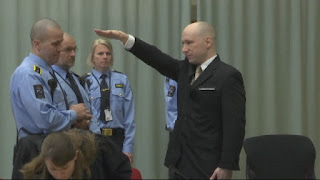 The report looked at attacks between 2000 and 2014, including that in Norway by Anders Breivik.


Rightwing extremists kill and injure more people in lone wolf attacks than Islamic terrorists acting alone, according to a report by a security thinktank.

The Royal United Services Institute (RUSI) in London says in its report Countering Lone Actor Terrorism that rightwing extremists across Europe present a substantial threat to the public that should not be overlooked.

It details the cases of 94 people who were killed and 260 who were injured in attacks by far-right terrorists acting on their own between the start of 2000 and the end of 2014.In contrast, religiously inspired lone attacks killed 16 and injured 65 people.

The report, which is released in updated form on Wednesday, says: “Rightwing extremists represent a substantial aspect of the lone actor threat and must not be overlooked.”


It says that lone wolf extremists have been responsible for 98 plots and 72 attacks in 30 European countries including Norway and Switzerland in the period examined.

Security services say the lone wolf terrorist attack is one of the most difficult to detect and preempt. The RUSI report is the result of detailed examination of terrorist plots and attacks across Europe and is being constantly updated.
They include the killing of 77 and injuring of 242 people in Norway by Anders Breivik in July 2011 in shooting and bomb attacks fuelled by his rightwing views and belief in the Islamisation of Europe.

The report says the intense focus among the public and in the media on the danger from the Islamic terrorist threat is at odds with the reality of the threat posed by rightwing lone wolves.

They inflict a higher death toll and in percentage terms more of them are lone wolves, as opposed to motivated by organised terror groups, than religiously inspired terrorists.

“The media, and consequently public attention, is largely focused on violent Islamist extremists; while this may reflect the broader threat, it is at odds with that from lone actor terrorism,” the report says.

The research was carried out by RUSI and a consortium of thinktanks including Chatham House and provides a database of lone wolf terror cases across Europe. RUSI said the overall objective was to see if it was possible to discern patterns or trends that could feed into recommendations for policy makers.

“Lone actor terrorists are perceived as presenting acute challenges for law enforcement practitioners in detection and disruption,” the report says. “By definition, they act without direct command and control from a wider network, and it is assumed that without such communications they may evade the ‘tripwires’ that would usually bring them to the attention of the authorities.”

It also states that lone wolf rightwing extremists are harder to detect than religiously inspired Islamicterrorists.

“It was established that 40% of rightwing extremists were uncovered by an element of chance, as part of an investigation into other offences or because the perpetrator accidentally detonated a device, drawing attention to his or her activities. Although chance was also evident in some examples of religiously inspired terrorism, overall 88% of interventions were intelligence-led, suggesting a clear disparity,” the report says.
RUSI also found that rightwing extremists were far less likely to talk about their activities, and were often discovered only after detonating a device or killing an individual. Islamist extremists, however, in 45% of cases talked about their inspiration and possible actions with family and friends.
“In contrast, only 18% of leakage by rightwing extremists was to this audience,” the report says.

Right wingers are also found to be more likely to be socially isolated or suffer mental health problems than other lone wolf terrorists and more likely to “post telling indicators” on the internet.