Monsters of the Political Abyss 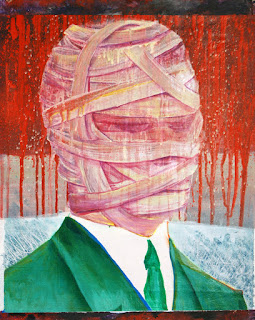 Here we go again, a fatal flaw, a another Brexit like event in Trumps victory , hurt pride, external enemies and there is a collective up-rush of the shadow. What is the problem that the left faces? The problem is an inability to understand how individual psychology can distort the collective lens through which we see the world. The problem for the right is the sheer inability to think collectively, the inability to understand that when we know an individual we should see how that individual fits into the collective. Every critic of my outlook that I have ever met has softened in their criticism. The danger is from those who do not meet their perceived enemies and opponents and I have come across plenty of those. There is now a list of over twenty people who are blocked by myself on Facebook. When we find that the monsters out there are not monsters we still the hidden monsters within.

Three quotes from Jung say it all.
‘”Anyone who wants to know the human psyche will learn next to nothing from experimental psychology. He would be better advised to put away his scholar's gown, bid farewell to his study, and wander with human heart through the world. There, in the horrors of prisons, lunatic asylums and hospitals, in drab suburban pubs, in brothels and gambling-hells, in the salons of the elegant, the Stock Exchanges, Socialist meetings, churches, revivalist gatherings and ecstatic sects, through love and hate, through the experience of passion in every form in his own body, he would reap richer stores of knowledge than text-books a foot thick could give him, and he will know how to doctor the sick with real knowledge of the human soul”
“The change of character brought about by the uprush of collective forces is amazing. A gentle and reasonable being can be transformed into a maniac or a savage beast. One is always inclined to lay the blame on external circumstances, but nothing could explode in us if it had not been there. As a matter of fact, we are constantly living on the edge of a volcano, and there is, so far as we know, no way of protecting ourselves from a possible outburst that will destroy everybody within reach. It is certainly a good thing to preach reason and common sense, but what if you have a lunatic asylum for an audience or a crowd in a collective frenzy? There is not much difference between them because the madman and the mob are both moved by impersonal, overwhelming forces”


“If you imagine someone who is brave enough to withdraw all his projections, then you get an individual who is conscious of a pretty thick shadow. Such a man has saddled himself with new problems and conflicts. He has become a serious problem to himself, as he is now unable to say that they do this or that, they are wrong, and they must be fought against… Such a man knows that whatever is wrong in the world is in himself, and if he only learns to deal with his own shadow he has done something real for the world. He has succeeded in shouldering at least an infinitesimal part of the gigantic, unsolved social problems of our day. “
Posted by Any Human Heart at 11:31