Rage, rage against the dying of the Light..the Daily Mail, Brexit and the Judiciary

In the end the plague returned . The bacillus broke through again , only 18 weeks from that brutal Friday in June. The demons that Nigel, Michael and Boris invoked at mid Summer swpt the land again The claim of getting our country back led to a Lousima or Alabama style lynching party. The tar and feather were prepared, the accusations of betrayal and the sneering returned ten fold. The daily Mail called them the “Enemies of the State" and the lord Chief Justice despite her oath to maintain an independent Judiciary gave weasel words and fell silent. 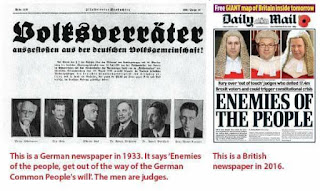 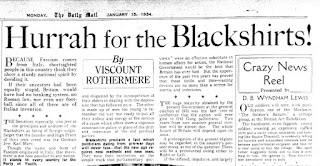 The Daily Mail with its crypto Fascist shadow began to build the bonfire. The three sorcerers had called on the spirit of sovereignty but their sorcery was imperfect, their herbs corrupted and their intentions corrupt. They called up a more ancient spirit, the spirit of hatred of those who are different, those who think in other ways, those who look outside and know we are all more or less broken. As the bonfire was piled high, the ghosts of the witch burners, the Macarthyite Communist hunters returned. The group of close cropped haired men who hate difference, originality and fear their own shadows placed on the fire the blind statue of Justice and began to chant “ Burn the Witch, Burn the Witch”. They called the 48% remoaners called on them to get over it and mocked and sneered. The daily mail was the torch that lit the bonfire. I watched an interview with one of its 2correspondents2 he burbled about how the judges were bound to be pro European, biased and elitists. He oozed the prejudice and the ignorance of not knowing, not knowing how we were all from the background, that we were all migrants at some point in our history. Yet strangely he fitted that pattern of the Mail whose shadow led to Rothermere saying hooray for the jackboots, good on Hitler! And the mocking description of dirty and false refugees that they described over and over again in 1900, in 1930, in 1972 and in 2016. 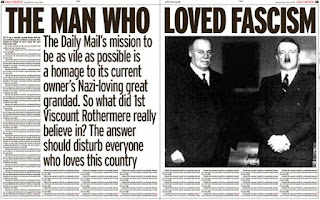 The Mail described one of the judges as a “gay fencer”, they sneered and mocked, they laughed and poisoned the minds of so many people. The minds of people afraid, vulnerable and ill at ease. The fear and loathing was projected from the large corporations and the press barons of the right upon the vulnerable, ragged victims of the arms trade and arms traders in the retinue of Theresa may and David Cameron.Yes the plague returned , the bandages burst, the scabs fell off and gaping wounds reappeared.

Sovereignty was reformed in the minds of Boris, Nigel and Michael but it was not as it was. It was much more base crude and brutal. As the blind statue of legal independence burnt on the bonfire its smoke went up meeting the smoke of other bonfires set alight by Donald Trump, Marine lepen and others throughout the world.Its message simple said “ If you dont fit in, then fuck off” . Even the words Teresa may used describing the “outsourcing” of the decision on Europe echoed the jargon and the phrases of the new brutal globalised world. 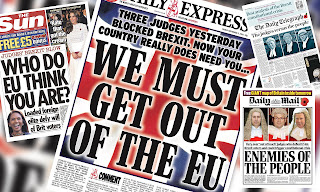 These are darkling times we live in. We are standing on the edge of the abyss and the monsters that the three wise-men of the right have unleashed look back and understand that that so many hypnotised by consumption and the myth of the scrounger do not see the shadows that we are carry unseen and repressed within our selves. We all stand in the eye of the storm. Presidential elections occur in the USA on Tuesday, In Germany and France later next year and a new “who rules” the UK election looms in February. We must find the angels of our better natures and take the sticks out of our own eyes rather than the splinters in the eye of the others. We have seen events like this before in Weimar, in Italy and throughout the Reformation and Counter Reformation. However grim my words sound . I see the rise on the other side of more tolerance, more learning, more self reflection and a realisation that libertarian and authoritarian are adjectives and not nouns. We live at a moment of great light and great dark.