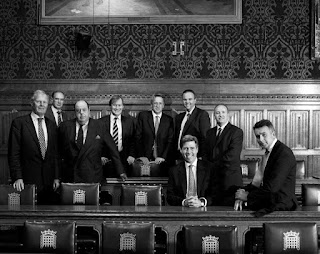 The Conservative Private Members' Committee (known informally as the 1922 Committee) is the parliamentary group for the Conservative Party in the UK House of Commons. The committee, consisting of all Conservative backbencher MPs, meets weekly while the parliament is in session and provides a way for backbenchers to co-ordinate and discuss their views based on their constituents' and their personal views independently of frontbenchers. Its executive membership and officers are by consensus limited to backbench MPs only, although since 2010 frontbench Conservative MPs have an open invitation to attend meetings.[n 1] The committee can also play an important role in choosing the party leader (and thus Prime Minister when the Conservatives are in government). The group was formed in 1923 but first became important after 1940. It is generally closely related to the leadership and under the control of party whips.


The 1922 Committee has an 18-member executive committee, the chairman of which must oversee any election of a new party leader, or any Conservative party-led vote of confidence in respect of the current one; such a vote can be triggered by 15 percent of Conservative MPs writing a letter to the chairman asking for such a vote. This process was invoked most recently on 28 October 2003, when 25 MPs requested a vote of confidence in Iain Duncan Smith by writing to the chairman, then Michael Spicer. Duncan Smith lost the vote the next day.


The committee was formed in 1923 but takes its name from the famous 19 October 1922 meeting at the Carlton Club in which Conservative MPs successfully demanded that the party withdraw from the coalition government of David Lloyd George ]The resolution passed at that meeting triggered the general election which the Conservative Party won – the many new Conservative MPs elected for the first time formed the Conservative Private Members' Committee to discuss and influence political events.


The MPs who founded the Committee were not the same as those who had taken the decision to end the 1916–22 Coalition government. It began as a small dining group of new members in 1922, then moved on to be a ginger group of active backbencher


[After the 1923 and 1924 elections, the membership expanded as more new Conservative MPs were elected, and in 1926 all backbench MPs were invited to become members. Consequently, it became a platform for the majority rather than a focus for discontent


The term "men in suits" or "men in grey suits" has been applied to a delegation of Conservative MPs (not necessarily backbenchers) who tell a party leader that it is time for them to step down without forcing an open challenge such as a vote of no confidence. It became popular after the resignation of Margaret Thatcher[
Posted by Any Human Heart at 15:33