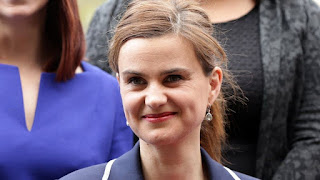 It's been a year since the murder of Jo Cox by Thomas Meir . Last night we watched a programme that and set both of their lives in contrast. She was funny, disorganized, a lousy cook, the mother of two children, an outward looking person wanting to build a community that was varied diverse and tolerant. She was liked, loved and respected by many. She was informed, well read and forward looking.
Thomas Meir never had any significant connection with anybody , no intimacy, no lover, in three years he had only sent 3 texts. As a child he washed his hands with Brillo pads, was suffering from OCD. Perhaps his racism began when his mother formed a relationships with an Afro Caribbean man. Thomas Meir a man without any human contacts snuffed out the life of another person who vast, wide and living contacts. It was thus vile , Nazi loving worm that shouted * Britain First's as he shot and murdered Jo Cox. It was this pathetic Nazi loving individual that claimed he represented the people and yet they strangely had no human contact.
In the last week the UKIP poster 'breaking point" language and the e and the tone of vote leave created a scenario of hatred, separation and blame that would have inflamed the lone wolves of the far right. It is indeed ironic, that those who have the least experience , the least contact and the lest knowledge of other cultures will be by large the most intolerant . Where there are those who wish to kill and maim the tolerant and outward looking the words of Forage and the propaganda of leave provided a fuse for these terrible events.
The abuse on line, on social media aimed at those of us who share Jo Cox"s views has been appalling . I can personally confirm and have experienced it. Those who peddle hate and separation empower the hidden Thomas Meir within society . There are numerous others out there, soulless , pathetic humans with neo Nazi views ready to strike at others who are their polar opposite.
The bullying a black woman with type 2 diabetes is part of the approach . The words used, the methods employed are vile and originate are used by others who fail to understand the implications of their behavior. To bully is not to kill and yet it kills the value and self esteem of the bullie`s victims. tjeresa May`s key advisors were alleged to exist in a culture of bullying with Tory central office. And the howling bullies if the Bullingdon Club and of the mass ranks of Tory MPs in parliament all form the backdrop of this culture.
Consider your actions and words Forage, Nuttal, Johnson they give reason to the hidden killers to strike and snuff out those who truly live and love....
Anders Brevijk Thomas Meir are the same as those like Salman Abedi and the killers of Isis. They are the same not opposites. They each lack humanity and the ability to love and live in the fragility that is our existence and bring in the world
Posted by Any Human Heart at 11:35