No locking up, no restriction of liberty no internment of suspects will solve the problems and causes of terrorism. The crucial strategy is to prevent the toxic thoughts entering and gaining traction inside people's psyche. The Prevent strategy is the only way Education, understanding , critical thinking is crucial. The publication of the report on Saudi links is vital. Thus will take a generation and no amount of surveillance will be a substitute for this approach. The same platitudes , the same approach will not work. The strategy of understanding the causes of terrorism and it's links with the arms trade, the supporting if autocracy, and the isolation of the marginal and vulnerable must be seen, understood and explained to us all. 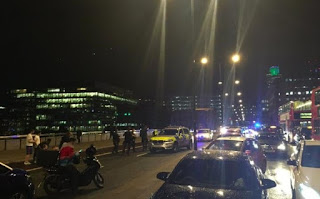 The horror of London bridge and the events around us haunt us, frighten us and make us sick inside. Yet all over the world violence like this occurs. Every day from Cairo to Jakarta, through South America and the far East events like this occur. We are shielded from it because the events that happen, the deaths, the stabbings occur beyond the reaches of the European and North American Media. And yet when it comes home to us, when we see the images of people like us running for their lives we begin to wake up. It is as if we are abused children waking up to the facts that our parents are abusers. But we are not children waking up, we are adults waking up to the reality of the way our rulers treat us.
Abusive rulers lead to abusive individuals who kill, bomb and maim us. These are the rulers who visit one another, forcing down wages, selling arms that will kill us, creating psychopaths who want to live as martyrs and then be given eternal life in paradise. It is no accident that people are created like this . Abuse creates such events and we must not hide from it. In the words of Boris Johnson our own Foreign Secretary
““Isn’t it possible that things like the Iraq war did not create the problem of murderous Islamic fundamentalists, though the war has unquestionably sharpened the resentments felt by such people in this country and given them a new pretext?”
The children of the Middle East, their parents and friends see sight after sight like this. They know the reality. So many of us here do not. We are comfortably numb lulled by a media that keeps us quiet. When the horror comes we are stunned frightened and alarmed. We wake to reality.
None of these things that I write about give me any joy or comfort. I will be abused by some because of these things that I say but as Mark Twain observed long ago. It is easier to fool people than convince them that they have been fooled.
The world is a mess, the economic system rips us apart and we hide from it. There will be many who say that I should not write such words as I write now while the dead and dying are put to rest. Yet is not this the time to wake up and challenge. The way to mark with respect those who have died horribly is to create a better world. By denying it, by locking it away we maintain the status quo. We must not defend ourselves by creating new autocrats to protect us at the cost oy ourselves or our freedoms. We must not allow fear to control us and surrender to the ravings of the far right. I think of the parallel with the Spanish general election of 2004...its results give all of us much to speculate on.
No amount of repressive government and control of the population through observation, or finger printing will save any of us from the rogue truck, the knife or the suicide bomber. The far right will use it to whip up hatred of the black and Asian face, Yet no exclusion, no scapegoating will ever make us feel safe. In a world of one we would even fear ourselves and our thoughts. Those who fight with monsters should know that the monsters fight back and that when we look in the abyss the abyss looks back. It is no accident that UKIP are the only party who will not suspend national campaigning today. Those who are desperate seek any means to survive. We also know that the security we seek cannot be given by one party or one personality. There are no strong and stable rulers who will protect us from the right. Strength and stability comes from ourselves, our compassion and our tolerance. It also comes from rejecting belief in one universal saviour...if anything we need a saviour who frees us from dictatorial sky fathers who tell us that there is true faith and false faith. Multiple faiths and the acceptance of them is the only way to peace and understanding
In a world where poverty is endemic, where the elite control us, where we are just units of consumption and the third world and the middle East are sources of cheap goods and labour we stand little chance of stopping horrors like last night. I wish so much it was not so and I wish so much that I did not have to write such things. Some of you will hate me for the things I have written others e=will not. Yet in a world of extreme poverty and extreme wealth , a world where the five permanent members of the UN Security Council are the biggest arms dealers. In the world of trump like denial and of fake news I can do no other but write these words. Yes another world is possible but we must wake up and smell the coffee, and understand. Perhaps you may not wish to see it but I make no apologises for my words. As I look out of the window from our home it is raining as if crying for the dead and the suffering.
Posted by Any Human Heart at 12:07