Strange synchronicities from a year ago..do you remember? England the only country to leave Europe twice in one week


Synchronicity is a concept, first explained by psychiatrist Carl Jung, which holds that events are "meaningful coincidences" if they occur with no causal relationship, yet seem to be meaningfully related. England has managed to leave Europe twice in one week. 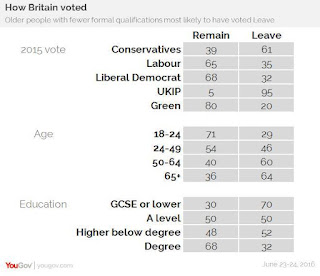 Karma(Sanskrit: कर्म; IPA: [ˈkərmə] ( listen); Pali: karma) means action, work or deed; it also refers to the spiritual principle of cause and effect where intent and actions of an individual (cause) influence the future of that individual (effect).


How ironic, how karmic it is, And who was responsible? look at the following table it states it all quite clearly. People over the age of 50, people with a poor educational background meaning those who are most psychologically fixed into an inward looking position, most able to be manipulated and most prone to be stirred up by the racists and the bigots. It is important that our education system should teach us to think, rather than obey. To discover rather than be made into a docile workforce and to realise that the forces who oppress us here are the forces that create international oppression and inequality. 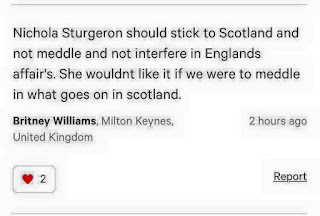 You remember the joke Boris Johnson , an immigrant and a voter were sitting around a table on the table were 20 biscuits. Boris Johnson took 19 of them and shouted out to the voter “ that immigrant is after your biscuit”. The tragedy is that vast sections believed Boris, Farage and Gove. They want you to be poorly educated, to think in a particular way and the collective unconscious has given you a message. They gave it to you via Iceland. It was no accident that on google the day after the referendum the second most searched topic was “What is the EU ? ” It was a little too late..........
. 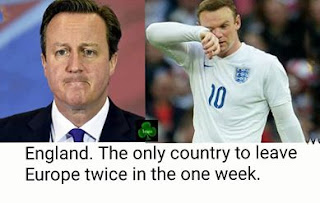 An election looms when will you wake up to what is coming?
Yesterday I came across a message in Port Talbot Debate and argue it had the words clearly stated “If you dont fit in fuck off” A great message for the English football team.............