"Into the Wind" a life of Carwyn James by Alun Gibbard 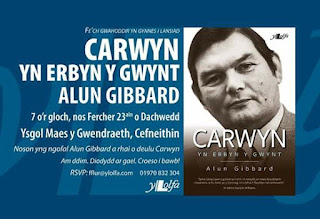 "Alun Gibbard’s achievement in this new biography of Carwyn James is a considerable one: revelatory in its fresh information and sensitive in its interpretation, so that now, at last, we can see Carwyn whole. Not an easy task to pin down this particular Welsh chameleon, but wherever Carwyn swerved, whether in his often troubled life or on those fields of play he so adorned, the biographer is there to make the judicious tackle. Then, in cameo after cameo, the action is stilled to let us grasp the lines of force, social and cultural, which ran through this remarkable son of Cefneithin and Cymru. When you finish this moving account of the dreams and deeds of Carwyn James you will, too, have a wider sense of the complexities of living in twentieth century Wales with one eye cocked, as was that of Carwyn James, for the Land of Lost Content from which he had strayed, and which he always sought to find again. A Triumph of a book. Professor Dai Smith (Co-author Fields of Praise: Official History of the Welsh Rugby Union)

A thorough and intelligent biography full of sympathy and literature. Owen Martell, O’r Pedwar Gwynt
Alun Gibbard is a talented writer, who has a first class insight into human nature both ontologically and psychologically. A brilliant and perceptive glimpse behind the legend of Carwyn. Martyn Shrewsbury, Psychotherapist.
A masterpiece. One of the best books I’ve read for a while. Carwyn James is one of the true Welsh greats, without a doubt. Jonathan Edwards MP
This is a Grand Slam of a biography, breaking new ground in the field of sports literature. One of the books of the year. Prof. Gareth Williams
A politician, a teacher, a communicator and an author, as well as the best rugby strategist in the world. Carwyn is still inspiring us here." Jon Gower
Posted by Any Human Heart at 15:26