From Grenfell Tower to Hillsborough...the scales fall from our eyes.... 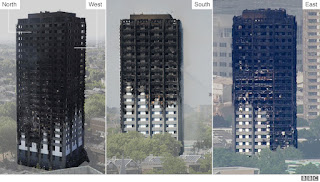 We will learn today if there will be prosecutions after Hillsborough. I do not think it will take 27 years to hear the same about Grenfell Tower. The climate has changed. The Sun and the establishment could hide the truth in. 1989 but today in 2017 it is different. Words not used in the 80s such as a inequality and the poor are back on the agenda. The political right though in power is weakened. The right wing Spectator magazine talked last week about * the dying of the right" ...this isost apt. We will learn the fate of the Labour amendment to the Queens Speech calling for increased spending on the emergency services and for the recruitment of more people for the Police Service as well as the formal end of austerity. It will be defeated but it will clearly show the vileness of the theocratic DUP tail that wags the Tory dog of capitalism. It is now clear the reality of power and of oppression and denial. Still the perception lurks that 120 survivors of the fire...now asks the question where are the remaining 400? The question will not go away and though it is difficult till human remains are found the perception of denial will not go away. Long ago i read George Orwell's essay " How the poor die" now perhaps we should ask the same question about Grenfell.

The poor have been ignored, denied, forgotten .For 35 years of Friedman and Neo-liberalism they have been made invisible but now the veil has been ripped aside. The useless Neo-liberal wars in Iraq , iand n the Balkans has shown the reality of the military industrial complex. The scales falls from the eyes of so many and the dissapearance of Tony Blair with his guilt ridden eyes reveals it all. It will not be long before Garage, Give , Johnson and IDS will be seen to be as toxic over June 23 as Blair was about Iraq.

As the events unfurl, as the chickens come home to roost ,event after event expose the reality of nature of power. denial, the cheapest price and the massive profits demanded by the corporations is being exposed. If Orwell wrote his essay today it would be called " How the poor and ignored burn and die.

Corporate murder is hidden by the lawyer and the corporate executive but the time it can be hidden from is at maximum s few weeks unlike the 27 years that it took for the reality of Hillsborough to be seen. Grenfell Tower has been the breaking point...enough is enough..