“Some people are fond of horses, others of wild animals; in my case, I have been possessed since childhood by a prodigious desire to buy and own books.” ― Julian the Apostate

I have been possessed since childhood by a prodigious desire to buy and own books.” ― Julian the Apostate 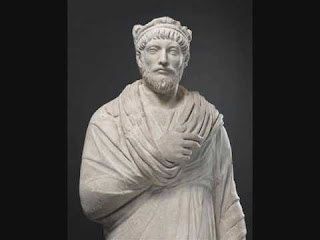 “Some people are fond of horses, others of wild animals; in my case, I have been possessed since childhood by a prodigious desire to buy and own books.”
― Julian the Apostate

I have always had great sympathy and empathy with the Julian the Apostate. I guess its because I sense ,in reading about him a person who felt born in the wrong time. Julian was raised as a Christian and like myself there was much pressure from one parent to become a Christian priest and from the other to know about an older mythological pantheist tradition. .In my case as in Julian's the older tradition won. SO for the last 40 or so years I have been fascinated by his experiences and observations.. Like Julian I love books and collect them and yes like Julian I have tendencies to be elitist and and critical. However I can assure my critics that I have no fantasy about being or wish to be an Emperor.......but I now feel like the old Pagan in Swinburne's Poem that follows
Hymn to Proserpine (After the Proclamation in Rome of the Christian Faith)

I have lived long enough, having seen one thing, that love hath an end;
Goddess and maiden and queen, be near me now and befriend.
Thou art more than the day or the morrow, the seasons that laugh or that weep;
For these give joy and sorrow; but thou, Proserpina, sleep.
Sweet is the treading of wine, and sweet the feet of the dove;
But a goodlier gift is thine than foam of the grapes or love.
Yea, is not even Apollo, with hair and harpstring of gold,
A bitter God to follow, a beautiful God to behold?
I am sick of singing; the bays burn deep and chafe: I am fain
To rest a little from praise and grievous pleasure and pain.
For the Gods we know not of, who give us our daily breath,
We know they are cruel as love or life, and lovely as death.
O Gods dethroned and deceased, cast forth, wiped out in a day!
From your wrath is the world released, redeemed from your chains, men say.
New Gods are crowned in the city; their flowers have broken your rods;
They are merciful, clothed with pity, the young compassionate Gods.
But for me their new device is barren, the days are bare;
Things long past over suffice, and men forgotten that were.
Time and the Gods are at strife; ye dwell in the midst thereof,
Draining a little life from the barren breasts of love.
I say to you, cease, take rest; yea, I say to you all, be at peace,
Till the bitter milk of her breast and the barren bosom shall cease.
Wilt thou yet take all, Galilean? but these thou shalt not take,
The laurel, the palms and the pæan, the breasts of the nymphs in the brake;
Breasts more soft than a dove's, that tremble with tenderer breath;
And all the wings of the Loves, and all the joy before death;
All the feet of the hours that sound as a single lyre,
Dropped and deep in the flowers, with strings that flicker like fire.
More than these wilt thou give, things fairer than all these things?
Nay, for a little we live, and life hath mutable wings.
A little while and we die; shall life not thrive as it may?
For no man under the sky lives twice, outliving his day.
And grief is a grievous thing, and a man hath enough of his tears:
Why should he labour, and bring fresh grief to blacken his years?
Thou hast conquered, O pale Galilean; the world has grown grey from thy breath;
We have drunken of things Lethean, and fed on the fullness of death.
Laurel is green for a season, and love is sweet for a day;
But love grows bitter with treason, and laurel outlives not May.
Sleep, shall we sleep after all? for the world is not sweet in the end;
For the old faiths loosen and fall, the new years ruin and rend.
Fate is a sea without shore, and the soul is a rock that abides;
But her ears are vexed with the roar and her face with the foam of the tides.
O lips that the live blood faints in, the leavings of racks and rods!
O ghastly glories of saints, dead limbs of gibbeted Gods!
Though all men abase them before you in spirit, and all knees bend,
I kneel not neither adore you, but standing, look to the end.
All delicate days and pleasant, all spirits and sorrows are cast
Far out with the foam of the present that sweeps to the surf of the past:
Where beyond the extreme sea-wall, and between the remote sea-gates,
Waste water washes, and tall ships founder, and deep death waits:
Where, mighty with deepening sides, clad about with the seas as with wings,
And impelled of invisible tides, and fulfilled of unspeakable things,
White-eyed and poisonous-finned, shark-toothed and serpentine-curled,
Rolls, under the whitening wind of the future, the wave of the world.
The depths stand naked in sunder behind it, the storms flee away;
In the hollow before it the thunder is taken and snared as a prey;
In its sides is the north-wind bound; and its salt is of all men's tears;
With light of ruin, and sound of changes, and pulse of years:
With travail of day after day, and with trouble of hour upon hour;
And bitter as blood is the spray; and the crests are as fangs that devour:
And its vapour and storm of its steam as the sighing of spirits to be;
Posted by Any Human Heart at 14:24