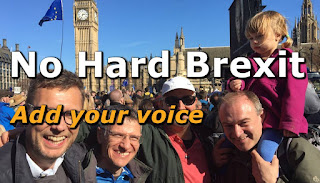 At the beginning of the General Election campaign Theresa May said she was seeking a mandate to negotiate her sort of Brexit; the result denies her that mandate.
The Prime Minister’s version of Brexit was set out in the Conservative election manifesto; it said that sovereignty was a red line, and concluded that Britain must withdraw from both the Single Market and the Customs Union. In doing so it threatened our economic interests, and funding for our public services.

At a time when many families have seen no improvement in their living standards for more than a decade, and public services are grappling with rising demand and squeezed budgets, voters concluded that these priorities were simply perverse and refused to endorse them.
The European Movement believes it is now for Parliament to play its proper role. The government may claim executive privilege in the Brexit negotiations, but Parliament should require ministers to explain, one by one and day by day, how each proposal which emerges from the negotiations serves Britain’s national interest.

It is time to reverse the burden of truth. Instead of assuming it is better to stand apart, we should expect the government to show why it is not in our interests to deepen our relationship with continental neighbours with whom we have common economic and political interests as well as a shared commitment to liberal democratic values.

When the present Prime Minister speaks of the “promise of Brexit”, we should remind her that John Major regards Brexit as “an historic mistake” – and millions of us agree with him. It is for ministers to show where any promise lies and MPs to require ministers to explain themselves.
That will require Parliamentarians to maintain an open mind; they will need to question the negotiating mandate developed by ministers and they will need to make it clear to ministers that they cannot take support for granted at the end of the negotiating process. Most importantly, despite anything the Prime Minister may say, it is essential that Parliament maintains for itself the option of voting for Britain to remain a member of the EU if it becomes clear that this is the best way to secure Britain’s national interest.

Against the background of the 2016 referendum a conclusion that Britain’s interests would be best served by remaining within the EU would of course have to be endorsed by the British people. But to rule out that option now would be to give the government a blank cheque.
The message to the negotiators would be “do your best, but we’ll endorse it anyway”.
That would be craven and contemptible.


For centuries, Parliament has been the guarantor of the interests of the British people. We are entitled to look to the new Parliament to insist that the conclusions of the Brexit negotiations are properly scrutinized, and if ministers cannot show that they serve our national interests, the conclusions should be rejected and voters should be given the opportunity to change their mind.
Posted by Any Human Heart at 16:01